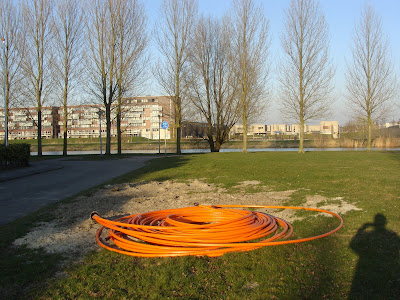 Fiber is getting close to our apartment in Almere now, as you can see from the photograph. Work is being done on the ring of fiber cables around the city. Two weeks ago the orange fiber cable was visible in our neighbourhood. Presently company laying the fiber cable is preparing the main routes in the neighbourhood. One of the difficulties is the crossing of the canal in front of our apartment.

Elsewhere in the city I saw work being done, laying the fiber cable in the street and bringing the fiber behind every door. The company has learned from the Amsterdam experience where in first instance the fibre cable was laid up to the door; then the marketing campaign for the subscriptions was started and the fiber connected to the home, behind the door. As this method yielded few subscriptions, now every house and apartment is connected (if permission is given by the owner).

But it is not only the fiber cables that tell the arrival of glass fiber in the neighbourhood. A public relation offensive has also been started. A letter and paper has been delivered to every mailbox, proclaiming the benefits of fiber and the activities in the neighbourhood. During the meeting of apartment owners next month, a representative of AlmeerNet will come to speak and answer questions.

In the meantime the network organisation, known as AlmeerNet, has been active already in other parts of Almere Harbour and Almere City. By the end of the year 70.000 houses will have to be connected. Presently 275 people are employed in the project.

I will follow the project closely as decisions have to be made: do we choose for AlmeerNet or are we sticking to UPC. The speed will not really be the issue, but the offer of radio and television programs and perks as well as the financial subscription will. Besides AlmeerNet has one provider, the incumbent telco KPN, so far, while it is an open net; UPC is a closed net so far and has also one provider, UPC itself. Yet there is a politically unanswered question whether KPN has a monopoly for the first year.

In short: decisions, decisions. I will follow and write the whole process of the fiber cable laying, the PR to the potential customers, the offer and the political situation. The articles on this subject will be gathered in the blog FTMH – Fiber To My (Almere) Home.