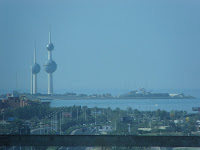 I am in Kuwait. It is my first time in the country. I flew in from Amsterdam on a KLM flight to Oman with a stopover at Kuwait. I was met by an representatives of the Kuwait Foundation for the Advancement of Sciences (KFAS) and whisked away to the VIP room, where the passport and visum where checked, while tea and water was served. A car was waiting to bring me to the hotel.

I am in Kuwait to be part of the moderation team for the national multimedia competition which is organised according to the World Summit Award model. The team exists of Gabi Deek, a WSA Grand Jury member of 2003 and 2005 for Lebanon, and Pedrag, who will take care of the competition software. Gabi and I have been a team before in a national competition in Bahrain; he is a fine link to the jurors as he speaks Arabic and I only English, except for some Arabic words. The national multimedia competition is no small beer. It is an event under the patronage of the ruling emir. And while winners of the WSA competition get a small memento and a certificate as well as global publicity, the 8 category winners and runner-ups of the local content competition will get 50.000 Kuwaiti dinar, which converts roughly to 150.000 euro; 3000 euro for the category winner, 2000 euro for the first runner up and 1000 euro for the second runner-up.

Part of the organising team is Manar Al Hashash, a WSA Grand Jury member of 2003, 2005 and 2007. She is a Kuwaiti citizen, who has a multimedia production company and has her own TV program every week. When I arrived, I spoke with her on the phone while she was preparing for a one hour broadcast.

As it is my first visit to Kuwait and I arrived after dark, I was very eager to see Kuwait. On the way from the airport to the hotel I saw the characteristic water towers being lit up in various colours. But I was more eager to see Kuwait by day as the hotel is on the seaside.