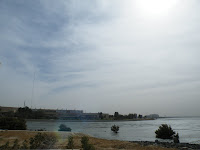 I am back from my first time visit to Kuwait. I left the country with 27 degrees Celsius and arrived in The Netherlands with 5 degrees Celsius. The weather was pleasant in Kuwait except for the sandstorm we experienced on Tuesday. The sky was diffuse and the sea water was very rough. Even the pelicans had sought shelter.

It is a colourful country, although the colour green, especially for grass, is rare. But as I arrived after liberation day, many buildings were lit up with the national flag and numbers 25 and 26, the day the Iraqi were chased out the country, leaving many oil wells on fire.

It is a very rich country. I spoke to someone who had a year-around collection of Rolex watches, representing some 2 to 3 million euro (divide 1 euro by 3 to get the value of the Kuwaiti dinar). The country is still rich with operational oil wells. And the petrol does not cost much; for some 70 gallons you would pay 5 Kuwaiti dinar, which tranlates roughly to 15 euro).

With interest I have looked at the infrastructure of the country. As other Middle East countries Kuwait has large shopping malls like the Marina one. But for the daily food there are cooperatives per neighbourhood with additional shops for dry cleaning, pharmacy and other needs. The people in the neighbourhood are co-owners of the co-operative and get at the end of the year a share in the profit. But there are also private shops owned by Indians.

Also the labour structure is different from the West. As in other Middle East countries much of the labour is done by people from Egypt, India, the Philippines and Indonesia. The construction work is mostly done by people from Bangladesh. In fact there are roughly 1,29 million foreign workers and only 1,2 million Kuwaitis. It is a close knit Kuwaiti society, based on family ties. Every Kuwaiti has a right to a job. And if he happens to loose a job due to lay-offs, the government will have to offer him/her a job within six months or start paying an allowance. Most of the Kuwaiti are in the service of the government. Not many Kuwaiti run a private business nor have many employees. Of course this labour policy has an effect on the development of private business and competition. As such there is not something like a branch organisation for multimedia and content. In fact the Kuwait eAward (KeA) competition was in fact the start of a network of people interested in multimedia and content. 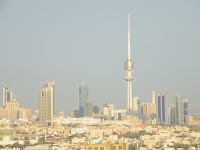 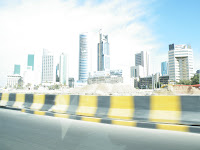 Kuwait is also working on its skyline. There is the old skyline in the city and the new one with twin towers in daring architecture. But the Kuwaiti have also a sense of preservation. On Monday night Ahmed, one of the jurors, took us to the area with new skyscrapers and should us around an old section of the town. The area looks very much like Les Halles in Paris in the good old days. They have meat there and a special hall for fish. It was exciting to see so much fresh fish (it made my mouth water). In this area there are teahouses and restaurants. We also stopped to have tea in the traditional way, on a stove filled with coal.