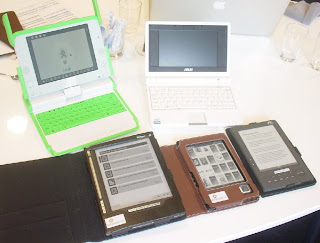 Kindle is rumoured to launch a European Kindle at the International Book Fair in Frankfurt in October 2008. Deutsche Telekom researches digital newspaper. Sony open for other formats and starts distributing e-readers in the UK. Cybook works with SFR on wireless e-reader. iRex technologies distributes iLiad without wireless through Borders in the UK.

This is just an inventory of actions to come in the field of e-readers in Europe. Despite the fragmentation in languages, it looks like Europe has become a new battlefield for e-readers. The real battle in the UK will begin in September in the UK between the Sony-Waterstone combination and the iLiad-Borders combination, both combinations of hardware manufacturers and book distributors. However before this battle starts another battle is brewing in Germany. Kindle is said to launch the Kindle in October, while Deutsche Telekom is about to launch an e-Paper service. The leaking of the news suggests that a combination of Amazon with Kindle and Deutsche Telekom is in the making.

But these are not the only moves on the European continent. Another move comes from Sony. One is a real important one. Sony is leaving its regional subsidiaries free to formulate a local strategy for introducing the Sony e-reader. It has not formulated an all-over European strategy to attack a particular market. The regional subsidiaries are not obliged to develop the consumer markets in language areas which hardly have any e-books in the local language. If they want to develop the market, they can so; but they can also develop the educational market and the technical/business market. It is not the first time that Sony attacks the European market with an e-reader. In 1993 Sony canvassed Europe with the first Sony e-reader Sony EB (se photograph). In the UK, France and Germany there was some interest from consumers, but in 2005 when there was an economic downturn the campaign was stopped. One thing Sony did well was to organise publishers, software integrators and distributors in committees sponsored by Sony; the objective of the committees was to develop an offer of e-book for the e-reader and to set up a common market campaign. But as it looks now, Sony will not be the promoter on behalf of the e-book industry.

For the general market there also two moves coming up. Although details are lacking iRex Technologies is said to work on a new model, which should be launched in December. And Kindle is working on a 10 inch screen device for the B2B and educational market.

Of course at the same time of this e-reader battle, the UMPCs are coming on the market with price tags from 99 US dollars and giving e-readers a run for their money.

In short we have some fascinating times ahead not only in Europe, but also on the general e-reader market.