BPN 1205 Almost half of Dutch households on digital TV 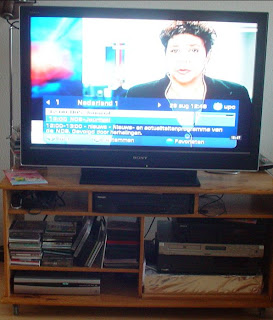 Recently we had a package offer from UPC, including digital television. Installing the box plus DVR was easy. But then the sweating moment came: would it work or not. And it did work, almost. Some channels showed disturbed screens with pixels running ad random. A call to the helpdesk put all the blame to the splitter and the quality of the cables used; this while the test of the digital TV box showed the signal to be positive. While testing the call was broken off by UPC. Another call to helpdesk delivered a more polite and qualified person to speak to. Eventually an engineer was planned in. Now everything works perfect; yet the test indicators of the digital TV box are all on red showing the signal to too low!

Now I read that half of the Dutch households have digital television. Sounds good. But if they have had the same trouble I have had, digital TV is not cheap for UPC or Ziggo to install: pressure on the help desk, which has to be populated then by incompetent people, and a lot of engineers replacing cables, splitters, putting in amplifiers and replacing outdated entry devices.

BTW Come to think of it, I am a laggard in digital TV