The UK newspapers regularly have a survey about the TV license fee, a subject which make UK people nervous. When the subject is brought up, they see all kind of moon and Mars cars swirling around the house.

Of course the fee of 139,50 pound (177 euro) is a hefty sum. And what do you get for it on BBC? Officially you get radio and television without advertisement. The license fee pays for 75 per cent of the costs of the BBC; the other 25 per cent comes out of a mix of revenues such as international fees for radio and television passing as well as rights to multimedia productions.

(Yesterdai the news broke that a BBC manager, who has worked for 39 years with the BBC, was to get a departure bonus of no less than 4 million pound. Of course this money comes from the coffers of the license fee).

But there is also good news for the BBC. A survey said: 61 per cent of the 2.021 Brits called the BBC their favourite station. The Scots were less happy as they think that the BBC is not representative for the way they live. Groups with low income have little sympathy for the license fee. From the survey it was clear that the license fee is not an ideal way to finance the BBC and only the BBC.

The UK is still a country which has the cursed license and all the myths around it. I have lived in the UK and have seen the way people behave towards the inspectors of the license fee. As soon as a strange car turns into the street, people will take a close look to see whether the inspectors are checking. Just have a look at lime@marmalade.net, a blog on how to circumvent paying the license fee. And the license fee is still a good subject for an April’s fool day joke and a race for aluminium foil. 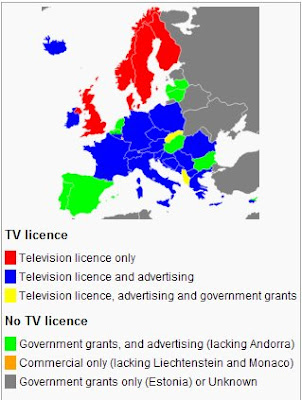 (c) Wikipedia
In Belgium and the Netherlands the license fee has vanished. The fee is now in the tax people are paying, regardless whether they have a radio or television and regardless whether they listen or not.In Germany the license fee is still levied and even worse, also computers are seen as radio and television devices. Does the lady of the house own a car with radio, she will have to pay up the Rundfunkgebühren, the license fee. And even a smart mobile telephone (or Handy as the Germans say) is seen as a television and can be charged for 17,30 euro a month. The department charged collecting the license fees is involved in many court cases, which so far have various rulings.

Even if the license fee has been dispensed with like in Belgium and The Netherlands, things will become even more crazy when the collecting societies start following that same line of device thinking. You will have to indicate on a form how many PCs are in the home or the company and you will be levied accordingly.