The year has almost come to an end. It has been a crazy year. In the beginning of the year I had a knee replacement surgery and became a bionic man. Rehabilitation took a while, but I had great exercises as I travelled to Kuwait and Saudi Arabia. And in the second half of the year I was in New York, Finland, Sao Paolo (Brasilia),Austria and Abu Dhabi.

For the content world it was also a great year on two fronts: e-books and mobile content.

E-Readers became popular and cheaper. I saw them on the beach and in airports. They are no longer the private resort of Amazon with the Kindle, but you see them now in Germany and Austria and at very reasonable prices; in fact the price is still going down. Of course the acquisition of these reading devices stimulate the sale of e-books.
However there is a dark side to this success. Where e-readers used to be reading devices provided with displays based on the e-ink technology, and e-reader can now also be an i-Phone, i-Pad, a Samsung Galaxy or any digital pane manufactured in China. In the Netherlands Bol.com even gave away such a device (including a firmware mistake), when a buyer bought 10 e-books.
I think that only the e-reader devices with e-Ink technology should be allowed to be called e-readers and not every digital pane with a tft screen or other display. The fonts are not as sharp as the fonts on an e-Ink display, besides the other screens have an interference, while the e-Ink screen is stable. The e-Ink screens should be marketed for excellence with a pay-off slogan: e-Ink screen for YOUR eyes only.

At Christmas time I have to sing. I did so in many a choir. The best one was in Utrecht (The Netherlands) from 1986 till 1990 in a church which is now abolished. On Christmas day we sang masses by Mozart or Handel with the choir, soloists and an orchestra. But in 1990 that was over. The church was closed and the choir disabandonned; a really bad decision. Since I did not sing on Christmas again.
Now I am again singing in a choir, but not on this Christmas day. But boy, would I have loved to sing along the Hallelujah by handel with this flash mob. 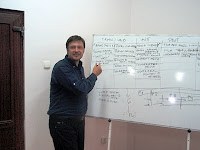 Prof. Doru Pop, coordinator of the EVA-project
Recently the EVA-project was kicked off in Cluj, the capital of Transylvania in Romania (domain of Frankestein!). The aim of this project is to build the campus of visual culture studies as a pilot of European Virtual Academy over the next two years. EVA will have courses, library, labs and forums in the digital world, taking advantage of social media tools and Open Source software.

EVA will involve the best experts of learning - the students - to create the campus. Professors, lecturers and artists are already preparing the first nine pilot courses to start next autumn. The general language of the campus will be English, but courses will also be translated or subtitled to Romanian, Italian, German, Hungarian and Finnish.

EVA will allow the students of the media and art programmes of partner universities to do exchange studies in a truly international environment without traveling.

The project is funded by the European Union Lifelong Learning Programme. The web site of European Virtual Campus will be launched in April.

In Abu Dhabi I met Ralph Simon. At first glance, he looks like the old man who walked out of the movie 'The curious case of Benjamin Button'. But he is young at heart. At his late age, he is the founder and chairman emeritus of the Mobile Entertainment Forum UK and ... the advisor to Lady Gaga.

He is not a stranger in the entertainment industry. He co-founded the independent Zomba Group of music companies (now a subsidiary of Sony Music Entertainment) with Clive Calder in the 1970s. In the mid-90s, he was Executive Vice President of Capitol Records and Blue Note Records in Hollywood and started EMI Music's global New Media division. He started Yourmobile (later renamed Moviso), the first ring tone company in the Americas, Europe, UK, Australia and Africa, in 1997.

Presently he also the consultant for mobile media for Lady Gaga. The star has many consultants around, telling her how to get clothed and what to sing. But Ralph Simon advises only on mobile media. Lady Gaga has discovered Twitter and publishes regularly tweets. In the meantime she has built up an army of followers of more than 7 million people. But Lady Gaga has set herself an goal: not 7 million followers but ….26 million followesrs.

And here is old Ralph Simon, who will have to think up a trick or face extinction. Of course more meat clothing will not attract more followers. But by looking at the Twitter tools and talking to the Twitter people, Ralph Simon will pull off the asignment and get Lady Gag no less than 26 million followers.

15/12/2010: My dear friend Marcella Lorenzi wrote a comment on the posting: I've been to Gaga's concert in Torino, last month... she knows how to entertain... as she claims, she's "a free bitch, baby"... at the end exaggeration will not pay.. 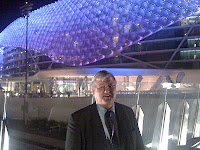 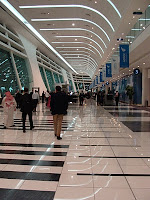 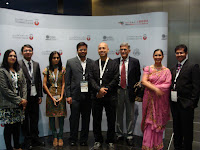 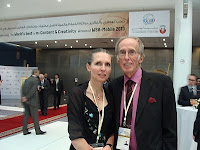 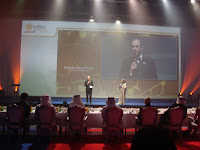 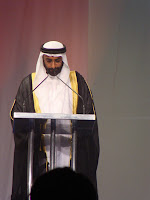 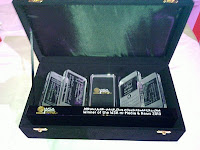 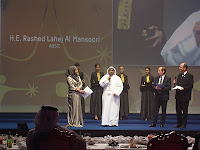 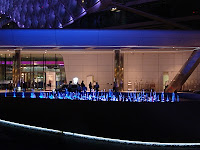 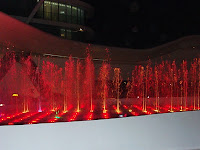 The award ceremony was the best ever gala held in the history of the World Summit Award since 2003.
BPN 1557
Gepost door Jak Boumans op 1:15 PM 0 reacties

I am in Abu Dhabi, United Arab Emirates. A few weeks ago I was looking at the racetrack during Formula 1 races, now I have a hotelroom on the racetracks. But no cars. This is a dreamplace, when you look at the buildings and ornaments, but you need to have a gold card! Here is my first photo-impression (You can enlarge the photographs by clicking on them; go back with the escape key). 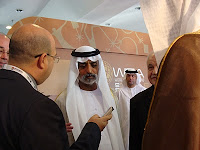 This is the crown prince visiting the UN Global Alliance for ICT and Development (GAID) Conference and the World Summit Conference for Mobile Media exhibition. 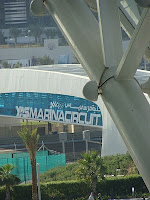 This is the entrance to the Grand Prix Formula 1 race track and the track itself (below being cleaned every day, even if there are not any races). 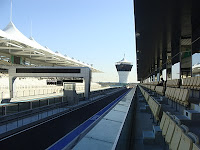 The bedroom in the hotel is spacious; I guess 5 by 15 meters with a view on the race track. The wet dock is like a fish bowl. 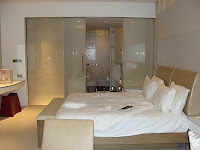 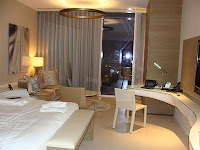 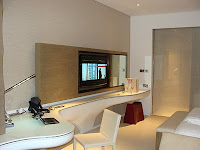 This the Yas Hotel. It is a cubile with a free form around it full of lights, which change every second by colour. 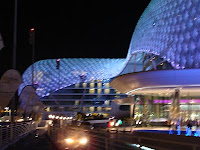 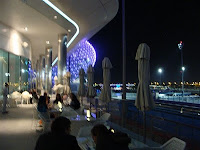 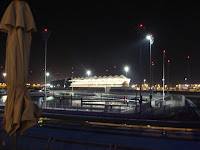 This video is a view from my hotel room into the marina and watch the racetrack!

I received a comment from my friend Nick Clarke on the word 'dreamplace': Nick schreef: Jak, this is not the time for democratic European states to be seduced or corrupted by Sheikdoms.The wealth they produce fuels terrorism. I am very surprised by your last 2 posts. A 'dreamplace' - is a outrageous observation in a country that has no human rights and is one of the most lucrative sources of Taliban funds. Sleep in a bed funded to kill European Service Women and Men - killed in part by the Country you comment as 'dreamplace'. Jak I thought you were wise. Nick

Okay Nick, I guess that you mean my last post and not the last two ( an e-reader is not controversial). I did not use the word dream palace and I specified the word 'dreamplace' now in terms of buildings and ornaments.