Today in the Netherlands the queen has abdicated and the new King, Willem Alexander, has been sworn in. There will be no republic in The Netherlands for a generation, roughly 30 years. So no festivities for the republicans 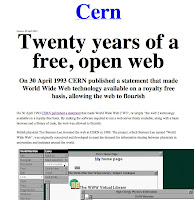 But for the digital natives among them, there is something else to celebrate. Twenty years ago on April 30th, 1993 the research laboratory CERN in Geneva released the software for the world wide web for free. It was the beginning of a new era. If the World Wide Web software had not been there, internet would have never come about.

The World Wide Web software was developed on a Next computer by Tim Berners Lee who worked as a researcher at a laboratory in Geneva. In 1989 he produced a first proposal on paper for a new online software. Central in this software was the concept of hypertext, an idea developed by the British scientist Ted Nelson. In order to link textual information of various fragments together and not in a linear or hierarchical way but ad random. It meant that text fragments could be linked but also text and illustrations, but also text, illustrations and sound fragments. The browser was born, but for it he needed a common mark-up language (HTML), a protocol (TC/IP) and a web address.

The software was spread around to developers from the 6th of August 1991 onwards. And only from April 30th, 1993 the web browser was released for general use for free.  So in 1993  a project group of the University of Illinois started to work on a browser, which could handle www pages, but also graphics, illustrations and text pages. By 1994 a commercial browser had been developed by Marc Andreessen, one of the Mosaic developers, under the name Netscape.
Gepost door Jak Boumans op 6:10 PM 0 reacties 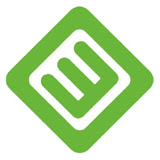 On Thursday April 4 the Dutch public broadcast system celebrated the launch of, Nederland 3,  its third channel, 25 years ago. From 1988 the channel brought information, culture and sports. Presently the channel is used amongst others for testing new television formats, using the slogan: For youngsters and those who feel young. The channel was launched in 1988 by the a minister, indicating the importance of its importance for the public broadcast system. The channel was instituted in a time when the commercial broadcast sought ways and bypasses in order to reach the Dutch audience. Commercial radio and later television companies started attempts to break into the radio and television market. Channel 3 was part of the last defence by the public system against those upcoming commercial broadcast companies.


Now 25 years later,  the channel offers news, music, travel, human interest, talk shows and documentaries, often in combination with new media. In fact it Is a varied basket of programs, produced by one of the 21 broadcasting companies.
The public broadcasting companies have been asked to reduces their spending this year with 200 million euro. One of the measures is to kick small religious and humanistic broadcasters out of the system. The Dutch system has a broadcasting company for every belief: the Catholics, the Protestants, the Jews, the Buddhists and the Moslems. Now the number of companies will be reduced from 21 to 8, with some big ones to merge. In this way the public broadcast system hopes to reduce costs.
But will this happen?  Reducing costs on such a mammoth tanker is difficult. Although it belongs to the small expenses , a proposal for a new overall logo was recently launched, which means new URLs, leaders, writing paper, coffee cups, merchandise.   Besides not all broadcast companies will have enough money to compete with commercial programs. So will channel 3 be the last channel in and the first one out? Why not.


Over the years the public broadcast system serving radio and television have been producing a variety of programs for every age and target group and the question can be asked whether this is needed. Do amusement programs have to be carried by public broadcast companies? Do expensive sports programs, including  the dope ridden Tour de France, to be paid by the public broadcast system? The CEO of the public broadcast system Mr Hagoort formulated his five  priorities at the last New Year reception:  journalism, Dutch language drama and documentaries, children’s programs, knowledge and culture, national and international events.
Of course these priorities look fine, but the proof of it will be in the pudding. Will the companies deliver quality or not? I guess that the companies will find out that they have not money enough to fill the radio and television channel. So the next step will be the reduction of channels, eventually to two television channels and two radio stations.


This would be a drastic move, but a realistic one. It would shape a fair playing field between the public and commercial broadcasting companies. But it would  also be change the world of  digital media companies, which have the public broadcast companies as , being sponsored with public money, as competitors. Yes it would be a really drastic move, but give it more than five years....
Gepost door Jak Boumans op 6:50 PM 0 reacties