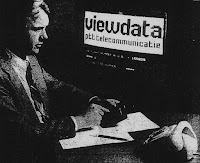 Forty years ago, on September 5, 1978, the long march of online public services in the Netherlands began. The public television 8 o’clock news introduced Dutch viewers to online services for the first time. From the exhibition floor of a consumer electronics fair the television reporter introduced the new digital media, showing  Ceefax-like teletext information, transported by television waves, and a Prestel-like demonstration of viewdata*/videotex**, an interactive system by the telephone. With this historical report of 3:36 minutes, Dutch consumers got a first glimpse of a future with digital media.

The technologies demonstrated used the television screen as a delivery station. Although there were already computers, so-called mainframes and mini-computers, these were used in science, in financial services and in administration departments. And the PC had just been developed, but hadn't really reached the Netherlands yet. The publicity preceding the consumer fair therefore generated television-focused headlines such as 'Extra opportunities coming on television' and 'Besides television for watching, there will also be text television'.


And as with all new services and products, prophecies about the benefits of these new media were made before and during the fair. Services would be available 24 hours a day, 7 days a week (24/7), with information and teleshopping, banking transactions would be handled the same day and school lessons and university lectures would be available at home. The new services would bring about a change in the daily life pattern of the Netherlands, where at that time no bakery was open on Sunday and no Sunday paper was for sale.

Start of the long march

After the consumer fair, the long march of digital media was started by the state-owned companies as the public broadcaster NOS and the telecom operator PTT. On 1 April 1980, the NOS introduced the Teletekst, moulded after the UK Ceefax service, but of course in the Dutch language. Teletekst was only available during TV transmission hours. On 7 August 1980, the then State Secretary for Transport, Public Works and Water Management, Mrs Neelie Smit-Kroes, launched the first public 24/7 online service, Viditel. It was the second operational videotext service using UK Prestel software in Europe. 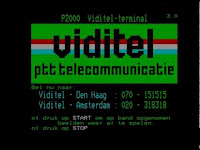 The two services have run different courses. Teletekst has been very successful up to the millennium. As many countries like the UK and Belgium have abandoned the teletext services, Teletekst is still operational in the Netherlands. The PTT service Viditel was less successful and was operational till 1989, when it was replaced by its successor Videotex Netherlands. This service worked with a different organisation and has multiple delivery devices (television, PC and Minitel). The service got a wider usage and had. A milestone was reached in 1994 with 250.000 users and 3 million connected minutes. However, Videotex Netherlands was overwhelmed by Bulletin Board Systems (BBS) on PC and  the introduction of the Internet. Videotex Netherlands was officially closed on January 1, 1997.

Consumers got a peek of internet with the launch of consumer services by XS4ALL on May 1, 1993. A real breakthrough came with the opening of The Digital City (De Digitale Stad, DDS) on January 15th 1994.This Amsterdam initiative drew much attention and subscribers to the service. After six weeks the service registered more than 10.000 users. DDS sparked commercial ISP competitor like Euronet*Internet, Planet Internet and World Online. Now after fourty years, the long march for online has reached the milestone of 98 percent of Dutch households online with internet via PC, telephone or tablet.

*Viewdata was the generic term for interactive services with teletext-like screen presentation over the telephone, which was later replaced by videotex.
** For the demonstration, a link-up was made with the Waterloo computer of the British Post Office (BPO).