BPN 1637: Archeology of the digital past

I finally found the video I have been searching for, for a long time. I have mentioned several times the electronic tablet as a precursor of the tablet. The video is of 1994 and has been produced by the research department of the American newspaper company Knight Ridder, which was lead by Roger Fidler.
I had the pleasure of meeting him in 1995 in Amsterdam, where he showed the video and the prototype of the electronic newspaper on Berlin format.


During the launch of the iPad I wrote a blog posting with the title Roger Fidler eat your heart out.
Gepost door Jak Boumans op 5:21 PM 0 reacties


The story tells of friends Tom, Lisa, Sophie and Jack, who get hold of a strange sketch. This changes their  normal life  completely. They want to know exactly where the sketch comes from. It appears that they are the trail of great secret, which brings them into dangerous situations. They steal an antique manuscript in Paris, play along in a century old sports game, have to move unseen  through the Italian city of Florence with a corpse and have to solve riddles about Leonardo da Vinci. With danger for their own life they continue the search.  Will they find the truth of the Lost Leonardo?
The book has been hailed by Dutch authors as easy to read and with a lot of suspense, like a movie, informative and contemporary.
The action is in the framework of promotion of reading pleasure and historical art awareness but by using modern technologies such as GPS codes.
Gepost door Jak Boumans op 9:50 PM 0 reacties

Yesterday I looked back on the 20th anniversary of the XS4ALL, one of the first Dutch ISPs that  opened its servers for consumers twenty years ago. Yesterday my (maybe last) handwritten letter was published online in the project Life needs Internet.

I met the digital artist of this project  at Graz (Austria) last year at the award ceremony of the European Youth Award. In his project, Jeroen van Loon asks people to send a handwritten letter to him with their first acquaintance and experience with Internet. My letter is four pages long and available on the Internet site Life needs internet.

For this posting I copied the first two paragraphs of my letter entitled From a link to heaven to (wireless) internet.


On February 1, 1970 I stood on the quay of Hook off Holland. After four years U.S. I was back home. I came from the pleasant sub-Mediterranean climate of New Orleans into the extreme cold of the Netherlands. And this was not just the weather, but also because of the drastic change in my life.


From my 11th year I had spent my life in seminaries, boarding schools for students who were trained for the Roman Catholic priesthood. Life in these institutions was quite ascetic. From early morning to late evening they were engaged in communication with the invisible deity in the form of prayer, meditation, contemplation and rituals in between study. To my 25th year turned my life around spirituality or better yet a line with heaven.


Life needs Internet is not an invitation project. Anyone can submit a handwritten letter and describe how they became acquainted with the Internet or how Internet affects their daily life.
Gepost door Jak Boumans op 3:00 AM 0 reacties

It is not clear who the first Dutch supplier of Internet access for consumers was. In 1992 there were only 239 companies users of the internet systems of service providers (ISPs) such as XS4ALL, NLnet, Knoware and IAE. For example, a company would pay for a subscription 100 guilders  (45.50 euros) to XS4ALL. The number of companies connected to the Internet was not large, because the internet online system was only known by small group of entrepreneurs, mostly university graduates. Entrepreneurs outside this group did not have any idea of ​​the Internet and were linked to other systems such as Videotex Netherlands, ASCII databases and email systems as Low Cost Linking.

The  ISPs were really yet interested in consumers. The ISPs did not have the marketing machines and helpdesks. If a consumer accidentally wandered by and wanted to have a subscription, h/she would get it, but without a manual. All that started to change in 1992. 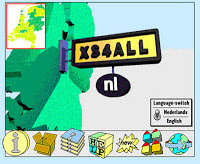 XS4ALL arose from the organization Hack-Tic, a group of people that exchanged hackers tricks, tips and files with each other. The organization initially made use of the facilities of the University of Amsterdam. But the university stopped the group from using its computernetwork. So that was the time Hac-Tic started  the foundation XS4ALL. 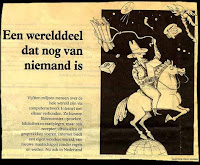 From 1992 XS4ALL started to accept members of the Hobby Computer Club (HCC) besides companies. And early 1993 the management decided to accept consumers. So 20 years ago on May 1, 1993 XS4ALL started to offer consumers access to its servers for 30 Dutch guilders (roughly 13 euro) a month . XS4ALL was the first ISP who started to take consumers seriously. They management predicted that  50 subscribers would sign on the first day. By the evening of May 2nd, 1993 at 19.00h the ISP had registered 500 consumers. There was clearly a need for internet among consumers. The first wave of consumer subscribers might have been helped by an article about internet, which was published in the Dutch national morning daily De Volkskrant that day.
From May 1, 1993 the number of subscriptions to Internet for consumers increased steadily, but not by the hundreds. Until later in the year XS4ALL started to collaborate with the political and cultural centre De Balie in the project and the Digital City in Amsterdam. The project had been devised to promote the municipal elections in the spring of 1994. Apart from the local television, radio and print media, the Digital City would be part of the public debate. On Monday, January 17th 1994 the Digital City opened its doors. This project caught the fascination of  many of the  national media wonder and as a side effect  it generated a lot of publicity for internet. In 1994 alone this project generated eight television and radio fragments, starting with an interview with Frank de Grave and the mayor of the Digital City Marleen Stikker in the 8 o'clock news on January 15, 1994 according to the database of Sound and Vision. After six weeks the project had tallied up more than ten thousand registered users.
In 1996 the foundation created a company, which was sold to the incumbent telecom operator KPN in 1998. However XS4ALL remained independent as a subsidiary and now offers various internet access services such as ADSL, SDSL and fibre and via KPN information and entertainment packs.
Gepost door Jak Boumans op 3:00 AM 0 reacties