While in Milano, our host took us to Leonardo 3, a small creative company, which produces crossmedia products on the basis of the works of Leonardo da Vinci. Ralph Simon and myself were flabbergasted. Here is a company of some five people, who produce exhibitions, books, games, video and (wooden) models. And not just obligatory products, but very exciting ones for young and old. In fact the products feed the curiosity for how technology works. 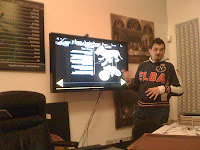 The producers or better craftsmen base all their work on the writings and drawings of Leonardo da Vinci. Of course Leonardo is mostly known for the Mona Lisa and the Last Supper. But he has left so much more. In fact he painted the Last Supper for money to continue his search into mechanics. The producers have a collection of facsimile works. They are quick to note that, yes, Bill Gates has bought some of Leonardo’s writings and drawings, but he has only 16 pages. Leonardo 3 has facsimiles going back more than a century. 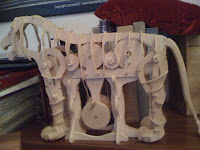 In the meantime the producers of Leonardo 3 have built up an impressive track record. They have organized several successful interactive exhibition in the States. Kids can see how technology works from wooden models, but also by touchscreens. The producers present the kids and parents with a screen showing a lot of parts of a wooden model, e.g. the lion. By touching on the parts, without and guidance, they will have to build the wooden lion and show that they understood how motion is set to work; if they do not understand the principle, they will create a non-functioning fantasy model. 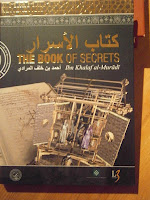 With their knowledge of Leonardo da Vinci, they have also put together an exhibition for the Emir of Qatar, based on The Book of Secrets by Ibn Khalaf al-Muradi, an early Arab scientists, showing amogst others how water clocks work. 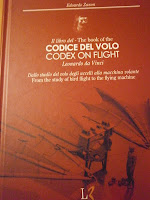 They publish also books. Yes they do it themselves. They have been maltreated by a large publisher with a very successful popular book, so they have started for themselves and have built up a nice library with publications on Leonardo’s workshop and on the Codex on Flight. These books look very professionally done. In the meantime the books have become a regular source of income to the producers. 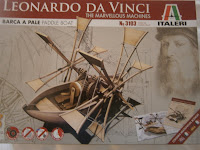 They are also moving into the business of games. They have models of Leonardo’s multi gunship, paddle boat, mechanical lion and self-propelling cart in plastic part. In this way kids can discover the mechanics. But the producers are now also moving in games. They have a prototype of an app, which is a game of putting Leonardo’s mechanics together. But they are also looking into the gamification of mechanics, so bringing hard core mechanics and for example 3D software together. Also this part of the company is a regular source of income.


The producers also regularly shoot video’s. Once they have developed a new model they produce a video of these marvelous machines. And they use the videos in their exhibitions, CD/DVD publications and for promotion on YouTube.


For all their work sucha as exhibitions, photographs in a book, on CD/DVD, on video, they need models. They usually make them of wood in such a way that they can work mechanically and be taken apart for break-out purposes. From the wooden models they produce again the plastic paddle boats and other puzzles.


What is the secret of their success. The producers look very cocky about that. They put it clearly that many so called experts on Leonardo da Vinci hardly understand the mechanical principles by this genius. Having studied and still studying the facsimiles of Leonardo da Vinci, have given the producers a lot of insight of what Leonardo was after. Using his principles, they can develop products in a crossmedia way.


The producers have 100 ideas, but still five people. And you wonder why. All those 100 ideas will take more than 100 years. In order to realise all their 100 ideas they need more funding in order to train people and produce the ideas. In fact they need a mecenas who is crazy about mechanics and see the link with IT, 3D software and publishing opportunities. One of their 100 dreams is a theme park on Leonardo’s mechanics. The plans are ready for it. And they do not just want the theme park a commercial venture. They want to put their workshop right in a type of an aquarium in such a way that the visitors can watch what they are doing.


The session with the producers of Leonardo 3 was short, but intense. Their enthusiasm, skills, and vision are contagious. You really wish them a mecenas, who provides them the opportunity to realize their 100 dreams in their lifetime. 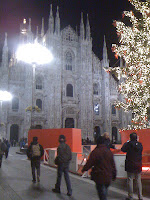 Last week I was invited to be present at the award ceremony of the eContent Award Italy in Milano. It was a great time. Milano at Christmas time was surprising. Around the Duomo was a Christmas market with many stalls, filled mostly with regional food products.


Out of the many submissions winners have been selected and the received their awards. The organizer, dottore Alfredo Ronchi, secretary general to the MEDICI framework, had put together a program with national and international speakers. 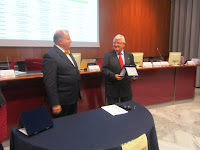 "Initiatives such as the World Summit Award are a concrete testimony to the commitment that is  increasingly given to innovative and creative products and services,” said John Paul Del Nero, commissioner for economic development, job training and the Province of Milan. “The explosion of digital content facilitates the transfer of knowledge, experiences and best practices in all areas, from health to science, from politics to the economy, until you get to culture and entertainment. This access and use of applications targets everyday use."


"Innovation is the strategic element on which to base the present and the future of economic development and society as a whole,” said Cristina Tajani Assessor to work, economic development, universities and research of the Municipality of Milan. “The Milan City Council has identified the areas of creativity and dissemination of innovation for central and sustainable development and this should catch in particular the attention of the younger generations. Initiatives as the WSA contribute actively to spread the creativity and innovation of citizens, businesses and even institutions, both at a national and at an international level. It is in a concrete way an enriching “confrontation" with more than 170 nations."


"This initiative dedicated to companies and institutions,” said Giorgio Rapari, director of the Chamber of Commerce of Milan, “demonstrates for all local institutions, that innovation is crucial to overcome the crisis and improve the competitiveness of our economic system."


Pierpaolo Saporito, a high level advisor of GAID, president and founder Infopoverty Occam program & conference, said in his speech: "This award is unique in the UN, and important because it not only enhances the creativity of companies and individuals, but stimulates new generations to see the opportunities that the digital revolution is opening, thus counteracting the wave of pessimism that pervades the current ruling class, who sees off the old world born during the industrial revolution.”

Ralph Simon with Madalina Tomita
Ralph Simon, chief executive officer of Mobilium Global and the founder of the Mobile Entertainment Forum (MEF) started out with some light notes, mentioning that many people were fast becoming ‘screenagers’ as they have become addicted to their smartphones and tablets. But he also indicated that this mobile movement will offer new opportunities never dreamt of. Apps can be produced in a short time and enhance the experience of an environment. And we have only started as smartphones can be part of eHealth, measuring blood pressure and detecting illnesses.


Photographs movies of the ceremony are available: