New business
Vinken worked as a neurosurgeon at the University Hospital in Leiden. There he came into contact with automation thanks to prof. Dr. A.R. Bakker, the promoter of a hospital information system BAZIS. Until 1966 Vinken also worked as an editor at Excerpta Medica, an international abstracts publishing  in the medical field. The publishing house had a permanent staff of 54 medical specialists who were editorially responsible for 35 abstract journals and reference works. The editorial staff produced summaries of biomedical articles and indexed these. In the sixties the archive stored more than 1.3 million English-language abstracts and a multiple number of index terms were deposited in a thesaurus. The paper production process was cumbersome and not very efficient.

More production, more accuracy, fewer people
When Vinken became managing director in 1966 became director, he soon developed ambitious plans for the publishing portfolio. He wanted to expand the number of abstract journals. In practice, he wanted more targeted journals with cross journal summaries. In the former production line this  meant that the relevant abstracts and indexing terms had to be typeset again. Moreover Vinken strived after full consistency in the thesaurus terms by a fully automated thesaurus Malimet (Master List of Medical Terms). In fact Vinken aimed at more production and more accuracy. Despite the  greater production, he did favour expansion of the typing  room where texts and index terms were punched on the ribbons for processing in typesetting machines 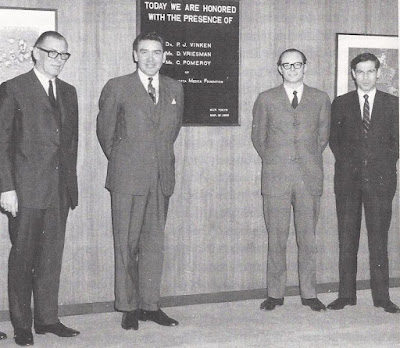 In response to these plans, technical specifications were drawn up for an editorial system  in 1967. In his search for a system, Vinken met Frans van der Walle, an aircraft engineer. He recommended him to buy a computer system that consisted of four linked NCR 315 machines. In a next step, all typesetting and computer activities of Excerpta Medica were transferred to a new software house, Infonet, a joint company of the publisher and Van der Walle. In 1968 a pilot run was successful and after the installation of the system in 1969, significant savings were realized in the production process of publishing. Moreover, thanks to the new production method Excepta Medica was able to launch new magazines for smaller targeted audiences.

Success
The success of Excerpta Medica and Infonet, made Vinken made a much sought after consultant in electronic publishing  projects. In 1969 he was consulting for the Dutch library project PICA, the Project for Integrated Catalogue Automation. The thesaurus method of Excerpta Medica was imitated in the project of the Great Spectrum Encyclopedia, for which Infonet developed the editorial and production system in 1970. 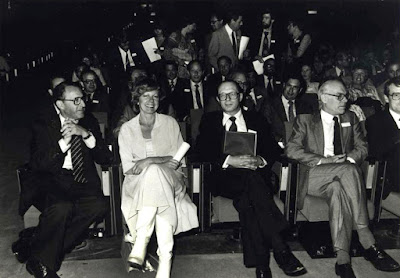 Pierre Vinken, sitting next to the later EU commissioner Neelie Kroes during the launch of the European Network Euronet-Diane in the Netherlands in 1980 (© NBBI)

In 1974 Vinken started the last phase in electronic publishing.  Excerpta Medica, now acquired by Elsevier, began to distribute its publications per tape to pharmaceutical companies for internal use of the research departments as well as electronic online services. In that year the abstracts became available worldwide on the American Information Service Dialog.


In 1976 Vinken was appointed professor of medical information collections at Leiden University. His inaugural speech was titled: Information generates information.


International
Until 1980 Vinken remained actively involved in the development of new media and electronic publishing in the Netherlands, but he also operated internationally. In 1980 he bought on behalf of Elsevier, the American publisher Congressional Information Services (CIS), reportedly f 43 million US dollar. CIS was engaged in collecting, indexing and distributing data from nearly 300 committees and sub-committees of the US Congress, both in print and digitally. The acquisition of this publishing house was the prelude to the establishment of the publishing house Europe Data in 1983 by Elsevier. This new publishing company had to apply to the US CIS formula in the European Community, but through multiple media and multiple languages. The company was off to a slow start, despite the financial participation of the Limburg Development Fund LIOF. But the company never picked up speed as Europeans do not pay for government documents. Vinken as CEO of Elsevier, decided to close Europe Data.


But in the year 1994 Vinken won the trophy of his electronic publishing career as an electronic publisher. As a member of the Board of Directors of Reed Elsevier he was part of the group responsible for the acquisition of the LexisNexis information service for 1.5 billion US dollar by Elsevier.

In thirty years Vinken saw the whole publishing process, from production to distribution and profitability change and experienced company successes of Excerpta Medica and LexisNexis, but also the failure of Europe Data. With such a career dr. Pierre Vinken proudly can be called a pioneer of new media and electronic publishing industry in the Netherlands, but also abroad.