It took ten years to reach a settlement and one-and-a-half year to pay out, but finally the buyers of shares in World Online (WOL) will be paid out 47 euro per share, this includes the original buying price and rent.
The IPO of WOL is still the example of the Dutch internet hypes of the turn of the century. The Dutch railways which had provided her with an existing network, the broadcast company TROS and the telecom company Telfort invested large sums of money in the company. The company should eventually become the largest internet provider of Europe.   ABN AMRO Bank was the advisor to the company together with Goldman Sachs. 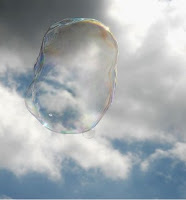 The downfall was due to the news that the founder and chairperson of WOL Nina Brink had sold her shares for 6 dollar a share (roughly 5 euro at that time).  Despite the knowledge of the launching banks this fact was not clearly mentioned in the portfolio by the banks Goldman Sachs and ABN AMRO. Some 150.000 buyers of shares lost  3 billion euro, according to the Dutch Investors Association.


Half a year after the IPO WOL was acquired by the Italian provider Tiscali for a meagre 5,9 billion euro, while the company was worth 12 billion on the day of the introduction.

(© 2000 Bert Driessen) The settlement and final payment will end a long trail of court cases and negotiations. In 2007 the association already received a favourite ruling, but it was not considered good enough. By November 2009 the banks ABN AMRO (the launching unit is now part of the Royal Bank of Scotland) and Goldman Sachs admitted that they had given a too prosperous picture of the value of WOL and settled.


In 2010 a settlement of 11 million euro was reached for the 12.000 investors who started a class action led by the Dutch Inventors Association. Another 5.000 investors were represented by the Consumer Claim.
Much to the chagrin of the investors, Nina Brink is no partner in the settlement. The banks were held responsible for the lack of essential information about the shares sold by Nina Brink.
Gepost door Jak Boumans op 10:56 AM 0 reacties

BPN 1607: 25 years ago Apple missed the web with HyperCard

This month it is 25 years ago that Apple presented the Hypercard program at MacWorld Expo in Boston. On August 11, 1987 Danny Goodman wrote: It is not a database, but an informational browsing tool. But the magazine Der Spiegel concluded after 25 years with the present knowledge, that Apple almost had invented the web, but missed it because of two mistakes.
The Hypercard program was the first software program, which linked text, image and sound to each other. At once there were links, searching in full text and interaction. This does not sound exciting in our days, but the browser with the HyperText Make-up Language (HTML) still had to be developed by Tim Berners-Lee in 1990.

That the Hypercard program was unique was clear from the start. The concepts of Hypertext and Hypermedia were floating around in the academic world and in multimedia production. Ted Nelson formulated those concepts in 1963, having attempted to build a computer network and simple user interface in 1960. Apple, however, considered the Hypercard program as a closed, offline database. The software developers still missed the split between data storage and data representation and consequently the turn to web software. As Apple asked $ 400 for the production software, the program did not get a wide circulation.

However HyperText did get a uniquely creative stimulus. In combination with the recently launched information carrier CD- ROM HyperText was considered to be a new publication medium. A stream of content products started to show with as first product Whole Earth Catalog, a production containing 2500 articles, 4000 photographs, 2000 text fragments and 500 sounds fragments including birds’ sounds. The brothers Rand and Robyn Miller published the adventurous productions of The Manhole en Cosmic Osmo. In the game Myst videos in the Quicktime format were incorporated for the first time.

HyperText appeared to be a unique solution for the German pastor Hanns-Johann Ehlen for the use in the Matthäus Evangelium. Since 1984 this priest was busy to digitise and analyse this text. By 1989 the first Hypercard Bible in the German language was ready. But the Hypercard was soon to be succeeded by the World Wide Web, as became clear when the Library of Congress moved its Hypertext presentation of the collection American Memory to the web.

Pearls of hypertext production beauties were manufactured by the Voyager Company in Los Angeles. In 1989 this production company published de CD Companion to Beethoven’s Ninth Symphony. This recording of the Wiener Philharmonic got an interactive analysis thanks to Hypertext by the scientists Robert Winter. Users were able to follow bar by bar from the score. Besides users could look up information on the life and works of the composer Beethoven. More than 130.000 copies were sold of the CD-ROM. The quality of the production was so good that Peter Bogdanoff, programmer and designer of this CD-ROM, is still convinced that the immediate, interactive music/audio experience is impossible to achieve on the web. 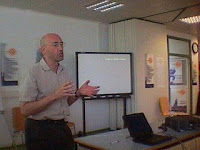 The Beethoven CD-ROM did not just pop up. In 1984 Bob Stein his wife Aleen Stein bought the rights to two classic movies Citizen Kane en King Kong for $ 10.000 en started a multimedia production company. They started publishing the movies under the Criterion Collection label; later on, they focussed with the imprint Voyager Company on the possibilities of HyperCard for education.
But they went further in October 1991, when they started introducing the first Expanded Books, which were priced at $19.95 each: Alice in Wonderland with annotations of Martin Gardner, the classic Hitchhiker’s Guide to the Galaxy by Douglas Adams and Michael Crichton’s Jurassic Park. In the Expanded Books it was easy to navigate, search and annotate. With dog’s ears a page could be marked for revisiting and fragments could be highlighted.

No less than 70 Expanded Book titles were published. Real top hits were A Hard Day’s Night, of which 100.000 copies were sold, Marvin Minsky’s Society of Minds (see photograph) and Who built America? As well as Oscar Wilde’s The Picture of Dorian Gray. However in 1995 the Voyager adventure was over as well as the marriage of the Steins. In 2004 Apple removed the features about HyperText en Hypercard from the website. HyperCard had lost; the web browser had won.
Gepost door Jak Boumans op 12:30 AM 0 reacties