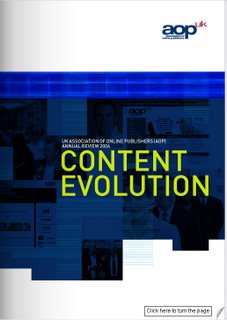 I receive regularly the AOP newsletter, the UK association of online publishers. The organisation is in the UK the counterpart of the US Online Publisher Association (OPA). The last association developed a European version of OPA, but AOP, which had been started earlier, moved on. And luckily they did, for we did not hear much of the European OPA after the initial rumbles. This while Europe could use a strong publishers online association for the industry and for the lobbying. The four years old AOP has now many activities such as studies, workshops and conferences, legal and political studies. The AOP like OPA measures the success of its members in the first place in terms of online advertising revenues and others.

In the Annual Review 2006 entitled Content Evolution. The Director Alexandra White makes the statement that the industry (traditional book, magazine and newspaper publishers as well as traditional broadcasters) as a whole is now feeling more confident than it was a year ago. Major factors contributing to this positive outlook include the penetration of broadband, mobile technologies and the first online communities.

There is also an alarming sound in the annual report: Online publishing skills gap widens. The report says: Recruitment remains an important issue for many AOP members, even more so than identified in 2005. Publishers rated difficulty in recruitment and retention as one of the biggest constraints on business growth.
This year, 61 percent of businesses surveyed reported an increase in headcount for their online business compared with 40 per cent in 2005. In the last year alone, 429 jobs, were created by the organisations surveyed and were further demand to be met , this figure would increase substantially .
This skills shortage becomes particularly prevalent as companies look to fill sales and editorial roles. Fifty-four per cent of those surveyed are recruiting for sales posts while 31 per cent currently have vacancies for editorial staff.

This is in the UK. And this skills gap is not only in the UK, but also in the rest of Europe. This is why I applaud initiative like the MBA Crossmedia as this course will deliver skilled managers and sales people. Specific editorial courses I have not heard of courses for people working in the industry, wanting to improve their skills. Perhaps we should develop a special European content course; not just to write for internet, but do to understand crossmedia editorially, do concepting and the creation process, know about the sustainability of content and know about the legal implications of content.