Today the official program on e-Government starts. Having registered again I discovered that the World Summit booth has been prepared already by the organization; they have set up the banners. It looks really good. The promised computers are not there yet and when they are finally there, they have a CD-ROM drive and not have an internal DVD player. But Terrapinn, the conference organizer, has that corrected before lunch. 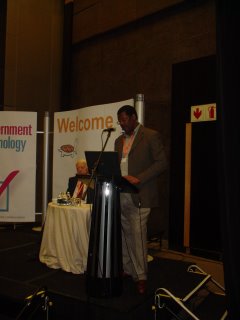 John Joslin of Future Proof Consultancy opened the conference, reminding the audience of the adagio: if the bank can address me personally, why should the African governments not be able to do so. One of the top officials of the South African government, Mr Mavuso Msimang (see photograph), speaks on the unleashing of the potential of ICT applications in Africa. He is in charge of the office which coordinates and pushes e-Government in South Africa. 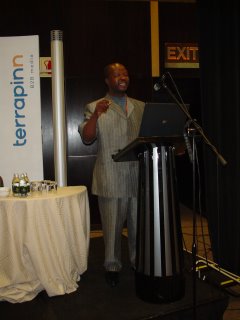 Mr Kgabo Hlala (see photograph) from the South-African Home Affairs really captures the audience. He is dressed in his summer suit, which means that the two sleeves of the cut have been shortened to half length. And he started with some capturing sentences, telling the South Afrikaners that they can not avoid the ministry of Home Affairs. When people are born they will have to tell the Homeland office; when they die, the relatives will have to tell the Homeland office. And in between the Office will issue ID cards and passports for crowd control. He brought it like a preacher and was able to keep the attention of the audience when he transmitted the message about integrated customer solution through the implementation of the smart card technology. The bad part about this speech was that I later herd that Mr Kgabo Hlala was going to leave the service as did his boss. So much of the policy he preached most likely will not be executed. But he presented one stunning Guinness Book of Records like fact: the Home Affairs Ministry has fingerprints of 29 million people (South Africa has 44 million inhabitants). It is the largest fingerprint database in the world.

After the speeches panel sessions are planned. The morning panel worked, but it did not provoke a discussion between the panelists and the audience, which consists mostly of government officials, amongst others a large contingent of the South African police department from Pretoria. The afternoon panels were a disaster. Many panelists did not show up, despite promises and confirmations by telephone. Responsible for the chair I had to improvise a lot. It gave me a good chance to show the categories of e-government and e-learning of the World Summit Award DVD. This drew a lot of attention from the people.

Tomorrow we will start again with a panel discussion, followed by a presentation. Again the programmed panel leader will not be present. So I have been asked to chair the panels in the morning. I certainly hope that all the panelists will show up. In the afternoon the Deputy Minister of the Department of Communications will address the audience about the ultimate approach to maximize public service efficiency and achieving customer satisfaction.