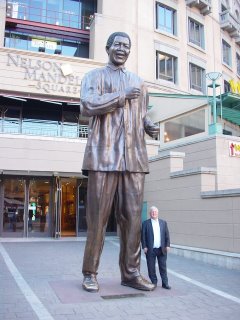 The official program of the Government Technology Conference in Johannesburg is over. Four days of speakers talking to the audience on government technology. Four days with delegates from various states in South Africa and African countries. I met a lot of South-African, including a delegation from the police force in Pretoria, a delegate of Zululand, who called himself ‘The Prince’. There was a large government delegation from Gambia, headed by their minister of communications Ms Neneh Gaye. (She and one of her delegates were clad in really colourful dresses). I also spoke with delegates from Botswana. All those countries are busy with e-government but are all in different phases. Looking from a European angle, these countries are in a different phase from the European and North-American countries. But one should not forget the saying: “The first city on gaz, will be the last on electricity”. So the European and North American countries might consider themselves ahead of the e-government game, but the African countries can have the benefit of moving ahead having seen the mistakes of the Europeans and North Americans.

Of course these governments have more to take care off than e-government only. They have to look after water and AIDS. These issues are of course important. But as a participant to the conference indicated e-government might be a tool to help in bringing water to the people and helping with mapping cases of aids. So government technology should also been seen as a supporting tool to the government objectives.

Yet there are risks for the African countries. One of the handicaps they might run into is the excuse of the way people work in Africa. Ms Lyndall Shope-Mafole, the DG of the South African department of communications, pointed to this aspect. The African way of doing things might take longer as there is more talk in order to reach a democratic agreement. The hazard of this might also be that democratic agreement might be used for stalling decisions.

It is clear to me that this conference can run a long cycle. I would love to be there next year and see what has happened in the past year and what new plans have been developed, not only in South-Africa, but also in Botswana and Gambia.