Having defined or described content, it is important to understand the value chain of content. So with printed content the value chain was fixed chain of value increasing modules. Starting with creation, packaging was the first value increaser, followed by production, distribution and consumers. As far as digital content on information carriers this linear value chain still is valid.

But the e-value chain for content has drastically changed for digital content. No longer is there the linear chain, during which every module adds value. Digitisation has already affected the chain. Content can be passed on without retyping, which led to a gain in in efficiency. Multimedia led to interactivity. Especially crossmedia has affected every link in the chain. In the content chain of the broadcast industry these changes have been noticeably in every link. In the printing and publishing industry, it has been purely efficiency gain. But the e-value chain for example has changed the position of the consumers from receiving information to reacting to information. 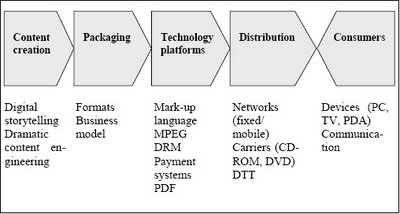 Instead of a linear chain, the e-value chain has now become a circle, where the module of packaging can dictate the content creation and where the technology platform dictates the distribution channels. And in all phases the consumer influences choices. Broadcasts can be distributed online, through interactive television and through mobile. But sending a broadcast through interactive television means that the producer will have to add something to a linear broadcast. And even the mobile broadcast might become interactive instead of interactive.

The value chain is of course also of influence for the production cycle. Content creation used to be the start of a production cycle, but packaging might have done the concepting and asked the content creators to start producing. Of course concepts can also come from distribution or technology platforms. However this will often lead to technical concepts, which usually produce irritating products and services.

The digital value chain opens up opportunities for mixing interactive television, internet and mobile technologies to provide emotionally satisfying content. According to Christian Fonnesbech, producer with the Danish company Congin, this requires developments in several areas “such as script-writing, production flow, business models, storytelling grammar for new media, and the distribution and penetration of a new product”.