Print media on the EC agenda 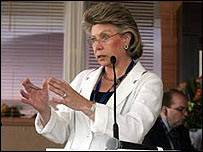 The talks between the editors-in-chief and Commissioner Reding covered several broad subject areas, ranging from business models and sources of advertising revenue, to the rules distinguishing editorial content from advertising features, and how they relate to developments in product placement within the audio visual media. Also educational and copyright issues were on the agenda.

“The press is at the heart of Europe’s diverse media landscape, and a corner-stone of freedom of speech and democracy”, concluded Viviane Reding, Commissioner for Information Society and Media. “We must therefore pay attention to the impact of EU policies on the print media. Both journalistic freedom and solid economic foundations are indispensable for newspapers and magazines to flourish in the multi-media age. I was therefore glad to reassure editors-in-chief today that advertising bans are not on this Commission’s agenda.”

On the basis of the work of the Commission’s Media Task force, Commissioner Reding has expressed on several occasions her strong opposition to EU advertising bans.

In November last year Commissioner Reding met chief editors from eight European newspapers and magazines from Austria, Denmark, Lithuania, Luxembourg, Malta, the Netherlands, Spain, and the UK will meet in Brussels at the invitation of Commissioner Reding to brainstorm on how the written press in Europe is addressing the challenges and opportunities arising from online publishing, digitisation and increased competition in the advertising markets.

This consultation was the starting point of a Commission study on factors affecting publishing industry competitiveness indicators. The study indicates that innovation and reform are major challenges facing the EU publishing industry. Newspapers, for example, are read by over 180 million people across Europe. But their advertising revenue is falling, their core readership is aged over 45 and younger readers appear to prefer other media. Digital technologies are fast changing the ways in which content is created, combined, distributed and consumed.

In the meantime the first papers and results on competitiveness of the publishing industry as well as on media literacy have been published.