Last night I had a meal with a participant of the Government Technology Conference. We had a nice seafood meal and enjoyed each others company.

We got back to the issues of the conference, but we got also talking about the larger framework, the state of telecommunication and internet. South-Africa still has a telecom company in which the state has 37 per cent. It is of course a minority share, but it still is a golden share, meaning that government still has a lot of influence on the company and it potential buyers. For one thing is for sure: one day the South-African telecom company will be bought. And it is only through liberalization that competition will be brought in and prices for example of ADSL will be driven down.

At present there is no competition. There are a few ADSL companies, but they are basically retailers for the South-African telecom company. It means that most people are still on dial-in connections and not on ADSL. And even dial-in is not cheap and fast. Officially the connection of my partner gives him 1Mbps, but this speed is seldom achieved. For the amount of money my table guest pays for dial-in you will have at least 4+ Mbps on ADSL.

Ms Lyndall Shope-Mafole, the DG of the department of Communication, mentioned during the last panel sessions, that some 100 schools will get a cyberlab, a special room with at least 4 computers, where kids can learn how to use the computer and draw information from the internet. The number of computers is of course low, but it is a start. I am not sure whether this is a public private partnership (PPP). I guess that it is not, but of course it should also be to the interest of hard- and software companies to make the children computer literate.

Problems like this can not be solved overnight and not in one generation. If I just look at my own track back, when I started to know about computers in the seventies, saw my kid playing with it at an early age and hope to see my two grandsons growing up and taking computers for granted. And all this is going on, while the Internet generations change about every five years. For South-Africa it will be a real race against Internet generations. 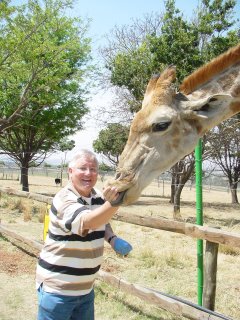 Today I took a trip to an animal park.