My first trip to South-Africa (2)

It was a long trip of 14 hours with a stop-over in Nairobi. The arrival at the airport of Johannesburg (Jo’burg) was not exactly a pleasure; it took more than an hour to pass the customs. The major hold-up was the passport control and visa; passport number was typed in and a visa stuck onto the passport and scanned (why not scan the passport number? Would make the passage faster). 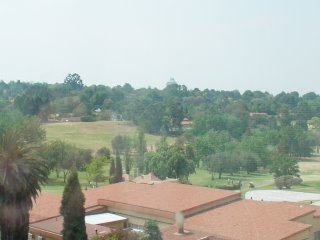 View from my hotel room in Sandton, near Johannesburg.

I had been warned already that transport will have to be managed by taxi. I got a ride from the Oliver Tambo airport to my hotel by a taxi driver from Soweto. He was like a city guide, telling about the city (3 million inhabitants), the province of Gauteng, land of gold (15 million inhabitants) and about Soweto and the 1976 disaster between the blacks and whites, all about the forcing of Afrikaans in schools (of course it was basically about social conditions).

The weather was pleasant with 24 degrees. Driving to the hotel I passed nothing but suburbs. And the first impression is that everyone got his own prison over here. All houses and condominiums have walled gardens, sometimes with bob wire. The whole scenery reminded me of Louisiana in the spring time: green, lots of flowers, especially azaleas, red ground, palms. Everywhere the influence of the Dutch is clear in the names of townships and streets.

Today I will attend a master class on IP Communications – the most prominent new technologies. I hope to be able to report from the conference in the Sandton Convention Centre. The conference is billed as Africa’s most interactive learning and networking conference focused on government technology.