A weblogger is not a journalist 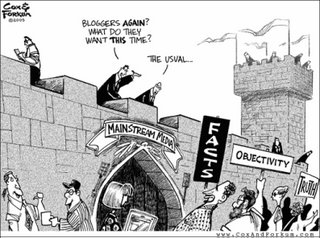 In science you often have to state the obvious. Everyone knows it, but the scope has to be precise. The same happened when Arjen Dasselaar did his research among 292 Dutch bloggers. He was anxious to know what the journalistic level of the bloggers was. His conclusion: most of the Dutch webloggers – male and higher educated - do not practice journalism. That can be read in his English language thesis 'The Fifth Estate – On the Journalistic Aspects of the Dutch Blogosphere' (PDF).

The established media do not trust webloggers. They do not adhere to the principles of journalism and are not investigative. Besides they do not protect democracy and freedom like the classic media of newspapers, radio and television do.

Weblogging is not exchangeable with journalism. Weblogging is a phenomenon in itself and it is not only good, if it is a journalistic product. Journalism has a social function. If blogs fulfil this condition partly, they should be recognised as they take up a social responsibility. .
To Dasselaar it is clear that webloggers use other methods to find the truth than traditional journalists. They tell a story to the citizens as independent persons. Depending on the medium it takes time to communicate the story. But on internet a story is immediate as is the reaction to the story. So instead of the checking stories and listening to both sides, a weblogger can post a story, to which anyone can react immediately.

In an interview with the Dutch language weblog De Nieuwe Reporter (The New Reporter) Dasselaar touched upon an interesting presumption: there are less journalistic weblogs in The Netherlands than in the USA. He points to a difference in culture to explain this phenomenon. In The Netherlands we have a consensus culture; we shy away from debate. In the States however they love debate; even in a small desert town they used to have more than one newspaper. Although a debate is not equal to journalism, a debate will hand you the arguments needed in journalism.