My first trip to South-Africa (3) 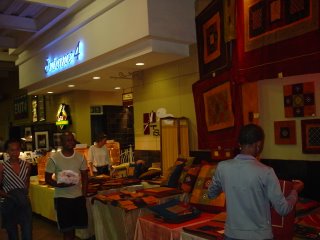 I feel like I am stuck in Johannesburg. I cannot get out of Jo’burg with my present plane ticket, unless I pay a big supplement. I cannot leave the hotel premises to go on foot and look around in the neighbourhood. I cannot get online, unless I get a voucher for another hour; ADSL has spoiled me. So I have started to work on a project plan, which has been dwelling in my head for some time (while I play the records I got as a present from jazz fanatic Walter Brown). And as the weather is not inviting enough for a dip in the swimming pool, I most likely will take a cab this afternoon to Rosebank Mall (see photograph) to visit the African market, just to get out of the hotel.

As I am involved in with many a multimedia/e-content competitions, I have always wanted to have the availability of one digital library filled with qualified samples of the best practice in European e-Content. The database should be filled with entries from multimedia competitions around Europe and perhaps eventually from around the world. The digital library should be made accessible by extensive, intelligent and multilingual indexing as well as by bi-lingual descriptions in English, the original language and, if possible, by more language as well as by sample videos of products or projects.

The core of such a library can be built up from the winning and nominated entries of the multimedia content competitions: Europrix (1998-2002) and the Europrix Top Talent Awards (2002- ) as well as the European entries to the World Summit Awards. In total this would amount to roughly 820 entries. But this core collection could be extended with entries of Europrix partners such as Mindtrek in Finland (10 years of history; roughly 100 entries), Multimedia & e-business Staatspreise in Austria and the Europrix.nl in the Netherlands (75 entries). But the digital library should also be open to non-Europrix related competition like BIMA in the UK, the Spin/Spider Awards in the Netherlands and the international Pirelli competition.

Of course I would like to extend the digital library to the whole world. The World Summit only has already 2250 entries in eight categories; they are all qualified by a local national expert, a committee or a national competition. But f course there are more good competitions out in the world such as the Webby Awards and the Eppy Awards.

Such a project has several objectives. In the first place it would preserve qualified samples of the best practices of e-content projects over the years in one library structure. In this way a historical image of the past would be built up of e-content and the technology. As the entries would have a fixed form of data: such as bibliographic, indexing terms, disciplines and questions on the development, the technology, the production and the distribution the database would be an interesting source of knowledge for developers, marketers and the industry in general. The database would be a study resource for students and developers to see how particular subjects have been treated and developed. But the database would also be a showcase for e-content sector in the European Union. And last but not least, the database would be an entertainment resource from which theme channel shows can be produced:
- thematic programs: nature productions, game productions, culture;
- the making of projects and products;
- going for gold: program on a particular competition
- pitching projects for capital.

Objectives of such a project would be: Preservation, Research, Study, Promotion and Entertainment. In order to service the various targets groups which like to use the resources a registered user group of professional users and a public user group for theme channels would be formed. The service would be not-for-profit, but would have to break even financially and bring in money for maintenance and development.
Closed user group member would come from specialised libraries, multimedia departments of colleges and universities; multimedia associations, supra-, semi- and governmental institutions and creative companies. Theme channels will be sold to ISPs, television companies and telcos.