My first trip to South-Africa (5)

Yesterday I was warned by the Dutch mobile company Telfort, that I was using a lot of mobile minutes. They were not used to the usual amount, so they warned by SMS, in case some else without authorisation was using my account. Not a bad action by Telfort. I told the contact person that I was in South Africa on business and he sighted: Oh South Africa, that must be expensive. I have run up a bill which is higher than the food bill! (I love the South-African food; it is 30 per cent cheaper than in Europe and tastier, IMHO). 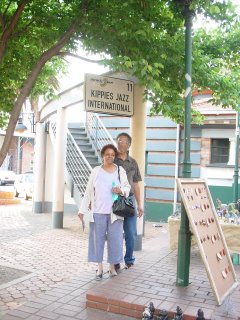 Val and Walter Browm at Newtown.

Yesterday afternoon I went with Walter Brown and his wife Val around Jo’burg. We went to Alexandria. My goodness. I have seen poverty in the States, the UK and Beijing, but this beats all. Unbelievable the favella-like neighbourhoods with plastic huts and all the overcrowding. We went also into Jo’burg. I had a feeling like I was in any US city, a city without a real face. Walter and Val showed the Newtown, at the foot of the Nelson Mandela bridge. We were going there for a meal in the Market Theater, but this was closed. We ended up in a jazz like café and restaurant with fine jazz music and the food was not too bad. This trip changed my view on Jo’burg. Yet I believe that my next trip in South-Africa starts in Cape Town.

Before leaving I was trying to check on my e-mail as I had made an appointment with someone at the airport. I had been working in the hotel with the Nomadic Hotspot. It was okay in speed. But it was not completely reliable. There were several incidents that I could use the network without an official check-in. On the last day, however, the network was more than 6 hours out of function (One hour I can stand, but more than 6 hours is a bloody shame, certainly given the price of R100 = 10 euro per hour). I still see Wi-Fi as the old hotel telephone rip-off. Of course companies have to recover their investment and make a profit, but with Wi-Fi it is an cheap trick; they make an easy buck. But despite these problems, I have been able to bring you a daily report on my stay in South-Africa and now I am back on my 8Mbps cable connection of UPC.

I arrived this morning at 10.30 a.m. at Schiphol airport and was picked up by my daughter’s partner and the two grandsons. I am home again till next month when we travel to Paris on business for a weekend and later on for the Europrix Top Talent Festival. November is going to be busy.