By 1987 it was clear that Viditel would not become a large scale service. In the other hand the French Téletèl system with the Minitel terminal was a success. The reasons for this success were not entirely clear. The (limited amounts of) free Minitel terminals contributed to the success, but also the total organisation of the Téletèl which differed from the Prestel model, followed by the Dutch PTT, influenced the success

Yet the question was whether introduction of the open French system would work in the Netherlands. After a lot of confusion and study a plan was put on the table under the name Infodam on January 14, 1988. A large scale videotext service with 600.000 households and 120.000 Small and Middle Sized Enterprises (SMEs) was possible, the report concluded; the organisation should, however, differ from Viditel; no subscription to the basic service; use of hybrid systems, PCs and Minitels; trigger services like the telephone directory. The reaction were various from very positive to questionable forecasts. In the magazine I&I an article was published under the name of Infodamned (a variation on the movie Amsterdamned of Paul Verhoeven which just was launched): Viditel had been unable to attract more than 30.000 users in seven years, while Infodam projected 720.000 users.

The cover of the Infodam report (collection Jak Boumans)

Potential investors such as KLM Pension Fund and MIP and the promise of a grant of the Ministry of Economic Affairs stopped the discussion by using investment as a carrot and demanded one plan and one network. On December 13, 1988 Videotex Nederland was founded; even the PTT participated in the venture. By April 1, 1989 the plans of Videotex Nederland were presented and sounded with 500.000 subscribers already more realistic. All systems would be used: Viditel technology, hybrid videotext and PCs and Minitels; only the two-way technology Demos which was under development in Zuid-Limburg should first show its economic feasibility.

Organisationally Videotex Nederland followed the Kiosque model without a fixed subscription. Videotex Nederland users could phone in through a buy number and select the service wanted. PTT Telecom took care of telephone and page billing. 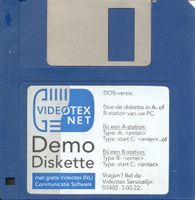 On September 1989 Videotex Nederland was presented as a service and started with 80.000 users, of which 30.000 in the public service of Viditel and 50.000 in the closed users groups of companies and organisation. In 1993 no less than 129 million connected minutes were clocked, used by 300.000 users. Chat boxes, relations and erotica were on top of the list, followed by telebanking and the telephone directory.