On Friday the nominated teams learn about the latest trends and entrepreneurial skills. This usually happens after the press conference. As a nice break between the press conference and the start of the opening of the EUROPRIX 2010 Festival, Adam Montandon the EUROPRIX 2010 Festival President and Gala presenter, directed the game HUMAN SPACE INVADERS. 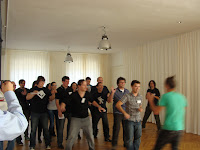 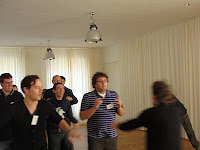 It was hilarious. But after that the serious stuff started: augmented reality. Two speakers had been invited for this subject: Mr Martin Lechner and Mr Michael Gervautz. 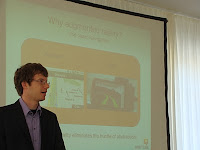 Mr Martin Lechner is the CTO and project manager of the Austrian company Mobilizy GmbH. He is responsible in the company for the technological company lead which covers architectural design and development of the Wikitude platform (clients, backend servers and web interfaces). In former positions he worked as a software developer for the development of Wikitude Android client , including 3G extensions for Wikitude with OpenGL, scalable Wikitude server architecture (Lucene tuning), client-server interaction and white label projects such as for Disney, as well as in the field of project management and porting Wikitude to other platforms (Symbian, Maemo, J2ME). He started with mentioning the magnitude of mobile telephones with 4 billion connections worldwide and in India only 15 to 17 million mobile phones. Het has been involved in Wikitude now for 2,5 years and in Mobilizy for 1,5years. Wikitude is an application which augments the reality of a Google map with information and photographs pulled from the web, with a compass and 3D. In this way road maps can be augmented with photographs of buildings and historical and agenda information. But the road maps can also be augmented with real world photographs of the roads, the navigation, the traffic lights and buildings along the road. You can start pre-driving before the actual trip. This type of activity is now done for the operating systems: Android, Symbian, 1Phone and Bada. Mobilizy is organising this augmented road reality and has partners like the Formula 1 companies ING and Red Bull. 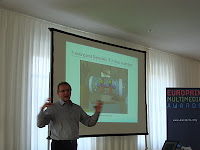 Mr Michael Gervautz, a computer graphics expert, is a director of business development at Qualcomm. He is responsible for building up an augmented reality developer network and managing relationships with the universities. He went further with augmented reality than traffic navigation. He sees roles for augmented reality in game playing, discovery, multimedia advertising, instructional activities and social networks. In games there could be a tactile feed-back. In marketing/advertising there could be track and trace. But there could also be coherent rendering leading to X ray vision, looking into a box without opening it. This could also be used for instructional activities such as manuals. Augmented reality is only at the beginning now. It will really take off with mobile media.

Then the part of entrepreneurship followed., presented by STARTeurope, a an organisation founded in Vienna in 2009 by a circle of entrepreneurial thinking people with technical and economic backgrounds. Driven by the same ideas – being the need for change in existing mind sets – the group of young people started challenging traditional perspectives. With the premise of innovation through collaboration” STARTeurope tries to make a difference using a three step approach. Firstly, the organisation leads a movement by establishing a community of diverse people sharing the same values such as curiosity for the new as well as the hands-on approach towards work. Secondly, though the vents STARTeurope wants to sensitise people to entrepreneurship and to alternative career paths, which counter conventional business wisdom. And thirdly, the members of this initiative make change happen not only by shifting thinking , but also by boosting local economies helping local entrepreneurs to start up their own business.