On Friday November 4th, 2011 Dr Pierre Vinken died at the age of 83 years. In most obituaries he will be remembered for bringing Elsevier to a merger with Reed. I would like to remember him as the pioneer of the digitisation of information in the publishing industry.
In my Dutch languagebook  Toen digitale media nog nieuw waren – Pre-internet in de polder (1967-1997) about the Pre-internet period in the Netherlands, more than a page is devoted to his pioneering.
Beside his job as a neuro-surgeon in the Academic Hospital in Leiden, Pierre Vinken worked at Ëxcerpta Medica, an international publishing company of ‘abstracts’ in the medical field. The publishing company had a fixed staff of 54 medical specialists who were responsible for 35 ‘abstract’ magazines and reference works. The editorial staff produced summaries of bio-medical articles and provided key words. In the mid sixties the archive contained more than 1,3 million English language ‘abstracts and a multiple number of key words. Besides the original articles were copied for back-up.
DrPierre Vinken was in 1966 appointed as the managing director of Excerpta Medica. He realised that the production process was hardly efficient. It was the start of developing new and big plans for the magazine portfolio. One point was the expansion of the number of ‘abstract’s’.
A summary was not intended just for one magazine, but usually was published in more than one magazine. In practice this meant that an article was retyped, including key words and again typeset. Vinken also strived after quality and especially in complete consistency of the key words, which were controlled by a thesaurus, called malimet (Master List of Medical Terms). Given these two area, Vinken judged that the complete production process should be computerised. Shrewd as he was, he did not want to have a larger production of magazines and expand his typing room. In fact he wanted more production and less people.
In his job as neuro-surgeon he saw the hospital information system being developed by Dr A.R. Bakker. For him this was the occasion to have a study performed and an inventory of technical specifications made. This was in 1967.  However the system that was sketched, did not exist. So Vinken started to look for a computer expert, which he found in Frans van der Walle, a air plane engineer. He advised him to acquire a computer system of four linked NCR 135 machines. This was the signal to start up a technical company next to Excerpta Medica for developing the software and running the production processes.  Under the name Infonet, the system house started to make shadow production runs in 1968. By 1969 the system was implemented started to realise significant savings, while the portfolio was expanded with magazines for even more smaller niche markets. With the knowledge gained Infonet was able to grow as a software company also working for third parties. In the Netherlands it developed a general encyclopedia system for Het Spectrum, a VNU subsidiary, and the national library system PICA, now sold to OCLC.
Being the first publishing house with such a production system and working in the medical sector, the company was an attractive addition for a scientific publishing house. So by 1972 Excerpta Medica was acquired by Elsevier which was a general publishing company with consumer books and magazines as well as business and scientific information products.  Vinken was accepted to the board of directors and started to sell consumer magazines and books and concentrate on a professional information company. By 1974 Excerpta Medica started to offer its magazines electronically, either by magnetic reel or online services like Dialog and BRS. One of the major feats was the acquisition of Lexis-Nexis in 1994, a launching platform for electronic publishing. Eventually Vinken led Elsevier to a reciprocal merger with the British Reed Company. In 1999 he took leave from Elsevier. The company had become the most important provider of business and scientific information. 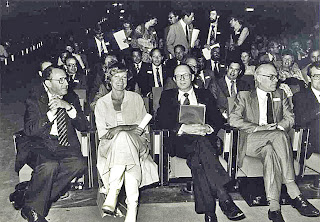 Pierre Vinken (right) next to Neelie Kroes, deputy minister for Traffic and Water works, during the launch of the Dutch node of the European network EURONET*DIANE in 1980. (photograph © NBBI Archief)