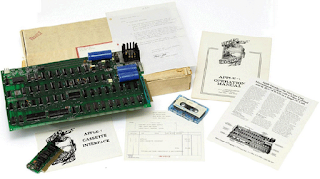 The devices  are the first digital ones being brought to be auctioned off. The value is partly due to the brand name Apple. The difference in the prices they took is depended on the configuration. The Boglione computer is a simple mother board with a 6502-micoprocessor, a 4Kb RAM memory, an audiocassette-interface and the Integer basic programming language built into the ROM chip. The original sales price of the computer was $ 666,66 (487,76 euro). A key board and monitor still had to be linked up separately.
Why did the Sotheby’s Apple 1 computer fetch a better price.  Quality factors. History: 36 years since its production. Moment: the auction was held one-and-a-half year later. The configuration: this computer was still working and had a keyboard and monitor linked to the motherboard; besides if was offered with four manuals.
This rise of financial value might indicate the beginning of a new branch in the auction business: digital hardware. The Apple 1 is in 2012 only 36 years old. Antiques usually are 70 years of age. So this Apple is only just a little bit over half the antique deadline. Or is this trend going to follow the law of Moore. Next will be the Apple II.