At the beginning of the new century the UN General Assembly took a decision to set up a forum, called the World Summit on the Information Society (WSIS), in which multiple stakeholders including international organizations, governments, the private sector and civil society could discuss the opportunities of the new information and communication environment, and also address challenges such as the inequality in access to information and communication that is called the ‘digital divide’.


The official forum was held in two phases. The first phase took place in Geneva from 10 to 12 December 2003 and the second phase took place in Tunis, from 16 to 18 November 2005. The WSIS was the start of the World Summit Award (WSA), which celebrates its 10 years anniversary together with the WSIS in next week’s WSIS Review 10+ in Paris. For the occasion I looked back at the rise of the World Summit Award.


Last century
Forty years ago the first US commercial electronic information services, Dialog and SDC, were launched. Scientists, technicians and financials experts could remotely reach central host computers in United States. In 1991 the World Wide Web was started and penetrated societies all over the world. And despite the Internet bubble of 2000, it was clear that the world was on its way from villages and cities towards a global information society. In 2003 the ITU and the United Nations initiated a platform for discussion and demonstration on this global information society.  One of its siblings was the World Summit Award, a global activity to select and promote the world's best e-Content and most innovative ICT applications.


After the Internet bubble
At the same time as the launch of the World Wide Web, the first industry protocol on multimedia was reached which presented challenges to the new media as well as the personal computer industry. People got used to personal computers as digital encyclopaedias, larded with photographs, graphics and sound, were bundled with personal computers. Business saw new opportunities coming its way such as the merger between AOL and Time Warner, but went into an overdrive with exaggerated visions, which eventually led to a bubble and deflation. However digital information did not fade away.


In fact, digital information increased and started to penetrate the veins of society such as government, business, culture, health and learning. Examples of multimedia applications sprang up all over the world on the desktop computers, portable computers and smart phones and tablets.  Digital information became digital content and mobile content are packaged in apps.


From 2003 the World Summit Award has been monitoring these examples. More than 3.600 applications from 160 countries have been evaluated in the past decade.


Origin of WSA
When the ITU and the United Nations started the initiative of the World Summit on the Information Society (WSIS), the ICNM (International Center for New Media) in Salzburg (Austria) looked into the UN initiative and started to work out a formula on the basis of its experience with the organisation of the Europrix multimedia competition in Europe. Backed by Europrix jury members, ICNM started up the project World Summit Award. 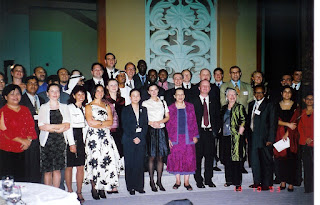 Rules
On the basis of the experience of the European competition, eight categories were defined in line with UN goals. The fields have been extensions in the course of events.


Original categories and between brackets the extensions.


Having constituted the categories, the solicitation of entries was a subject. Having an open submission could be uncontrollable in the amount of entries and jury time. Eventually the Olympic principle was eventually chosen: every country was allowed to submit one entry per country and eight entries in total. In this way also the problem of having to choose from more entries per country was avoided.


Jury
The jury members were chosen from the national experts and a balance was sought between the continents. In total 30 to 40 jury members per jury session were invited. Every jury session should not have more than 50 pct. of jurors from a former jury. So far this has worked and has led to a self-refreshing jury body. Besides the representation was so far a clear representation of the 35 jury members of the 160 countries associated with the World Summit Award.


The jury so far has met in person, usually invited by a country. In 2003 Dubai invited the jury and in 2005 Bahrain was the host, but also Croatia, India and Hong Kong did invite the juries. This presence of jury members suited the jury process in which the jurors reached a consensus on the winners. 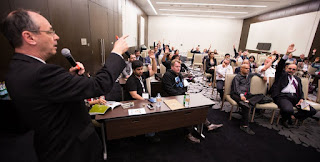 The World Summit does not have a slew of winners, ranging from one to three. However the competition has maximally five winners per category, regardless of the origin of the entry.


In 2007 the World Summit Youth Award was instituted, a competition for the youth up to 30 years of age promoting the UN Millennium Development Goals. The WSYA is a success as no less than 1150 young social entrepreneurs, web developers, app developers and data scientists from 121 countries have applied for the WSYA 2012 competition. In the meantime a European event, called the European Youth Award has been started in 2012 for the first time. The call for entries generated 35 projects coming from 16 different European countries.


As mobile has become a fast growing medium even overruling internet on personal computers (desktop or portable) it was decided to start up a World Summit Award Mobile. With the support of Abu Dhabi (UAE) a jury and award events have been set up. The soliciting of entries has been successful so far. No less than 435 apps from 102 have been sent in and are online judged by a jury of 50 worldwide jurors.


General trends
The branding of the World Summit Award already indicates that trends are coming up and become important. When the first session of the World Summit on the Information Society was held, multimedia was still important. Compact disc media functioned as packaged bandwidth. On CD-ROM or DVD enough bandwidth was offered to play movies and intricate games as most networks did not yet offer broadband at a reasonable speed.


But as the networks grew in speed, depending on the country, multimedia productions started to decrease, while internet sites increased. Besides social media, such as blogs, second life, Facebook entered the scene.


However as smartphones were triggered by the iPhone of Apple, blogging became micro-blogging, even to the point of a capacity of 140 digits as in the case of Twitter. The launch of the tablets by Apple (iPad) and Samsung (Tablet) created a complete new world of apps, software routines filled with content. Just before the launch of the tablets, e-reader caught on thanks to the nice, non-interlaced screens, holding an amount of books not seen in the Sorbonne university library in 1795.


Content divide
From the first session of the World Summit on the Information Society, the content divide has been an issue. The interest in hardware was greater than the interest in content. This was partly the problem because of the long production time of digital content. So quality products such as games and sites were not available and in great demand.


But when smartphones and tablets started to supersede desktop and portable computers, the content productions started to change. The apps are checked for basic conditions by the store owners of iTunes and Google Play. Although these basic conditions do not guarantee quality products, there is a turn in use. In a continent like Asia the smart phone and tablets are prevalent and working in favour of narrowing the content gap. 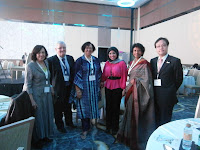 Jak Boumans is principal consultant with Electronic Media Reporting in The Netherlands. He has been with Europrix juries and all World Summit Award juries. He is a World Summit Award Board member and the Secretary General of the European Academy of Digital Media.