Not many people ever get the task to produce a catalogue of the world. Depending on the format of the reference work, only editors of a new encyclopaedia might be lucky. Such an encyclopaedia should be a picture of the contemporary world and not a reference book filled with Greek and Roman mythological figures. But how do you produce such a catalogue and put it in order? A conversation with a librarian might point you to classifications like the Dewey Decimal Code (DDC) or the Universal Decimal Code (UDC). The DDC and the UDC both consisted of 9 comprehensive categories. With the UDC you could accommodated a document in a category of a document, disclosing also information about the contents of the document by thematic keywords. Within these categories, the lemmas for future articles could be filled in, creating a picture of the different disciplines and eventually developing a picture of the world.

UDC
The UDC classification scheme was developed by Paul Otlet 1868-1944). This idealistic Belgian spent his whole life working on cataloguing the world, believing that the more you classified, the better the world would become. Apart from the classification scheme, he designed also index cards of 12 by 7 cm, on which a classification could be written. As the UDC system allowed more keywords links could be established interconnecting these thematic keywords. In this way a catalogue of the world would be created and a basis for an information society. Eventually this catalogue would result in the Universal Book, the book of source crowded, and global knowledge. In 1934 Paul Otlet had built a catalogue of some 12 million index cards which with the support of the Belgian king were housed in the exhibition buildings of the Cinquantenaire in Brussels. 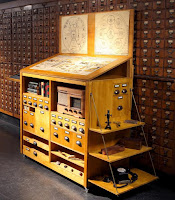 Apart from the catalogue the venue also serves as a museum of knowledge, the Mundaneum. It demonstrated Otlet’s dream of the knowledge society and how the index cards eventually could be linked together electronically. The museum contained also a room with the latest microfilm equipment and a telegraph room. In the Second World War the collection of index cards and museum collection were destroyed.


Predator of Big Data
Paul Otlet can be seen as a pioneer of the knowledge society. Internet he has never known, but he was certainly contributed to it. Although Americans always ascribe the birth of the concept hypertext to Ted Nelson (hypermedia) and Vannevar Bush, Otlet constructed a mechanical retrieval system in 1934 complete with wheels and hooks which brought the relevant tags/links to the surface. Actually Otlet’s catalogue was Google on paper. His 12 million index cards can be seen as a paper predator of Big Data.


Reopening Mundaneum
Today (25.06.2015) the Mundaneum reopens in Bergen / Mons (Belgium) with the exhibition Mapping Knowledge. The reopening is in the framework of Mons, European Capital of Culture and has received support by Google.

In 2014 there is a very readable book about Paul Otlet was published under the title Cataloging the world, Paul Otlet and the Birth of the Information Age, written by Alex Wright and published as a printed book and as an e-book by Oxford University Press (ISBN 978 -0-19-993141-5).
Gepost door Jak Boumans op 10:24 AM