There was a special session at the Amsterdam Museum, where a preview was given of the restoration of the site The Digital City (DDS). This historic site was the internet site that kicked the Dutch consumer on January 15, 1994 into the internet era. It was a project, based on the US free-nets, and started by the political-cultural center De Balie in Amsterdam and XS4ALL, the first consumer internet ISP. It was started at the beginning of the municipal elections  of spring 1994 and expanded the public media debate range from the local television, radio and print media to internet. The metaphor of a virtual city was chosen to emphasize the character of the public domain of DDS. 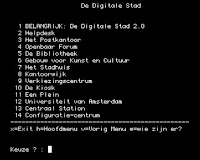 First Dutch digital city
At first the information and communications services were presented in texts, but from October 15 onwards the interface became graphic. The organization received a grant from the city of Amsterdam to set up the site. The initiative received a lot of public attention on radio and television and in the press. Marleen Stikker was the  virtual mayor of DDS and the media spokesperson. And the initiative did receive a lot of attention. In fact thousands of potential online users were clamouring on the gates to get in and get a dial-up connection through DDS. After six weeks, the project already had more than ten thousand registered users. Not only internet provider XS4ALL was surprised by the interest, but also line provider PTT Telecom.

Virtual experience
The initial enthusiasm of DDS caused a rise and fall. DDS became an ISP, but eventually could not manage to stay in business and disappeared from the internet scene. The remains were buried with the other archives of Amsterdam Museum (the first Dutch museum to recognise digital heritage).


Until he original files were found back in the Amsterdam Museum Archives. This led to the project ‘DDS resuscitated’ sponsored by he Amsterdam Museum, the Waag Society, University of Amsterdam and Sound and Vision. Computer science students from the University of Amsterdam and the Free University found a file of 10Mb on a hard drive. This drive had been stored for 20 years. The students restored the file in two versions: one with all data and one replicate. On June 30th, these were demonstrated as DDS version 3.0.
In the fall DDS version 4.0 will be shown. It will be an emulation completely programmed anew "to create a modern, stable and secure functioning site”. In this version users will be able to select an avatar and can move through the city from bar to post office and library using the subway. It will bring back some of the first feelings, experienced at the introduction of DDS. As one can still walk through Pompeii in Italy and experience the Roman city as it was, so users will also be able to visit and experience the first Dutch virtual city of 1994, complete with map and guide.

10+ years back in time
"DDS resuscitated' is a first web archeological project in The Netherlands, which offers a view of internet as it was between 1994 and 1996. It will allow users to look back a little over a decade. Hopefully the project is a first incentive for more online projects like the first online Dutch public service Viditel 1980. It would be great to recreate this service and make it available online. It could bring back the feeling of how users digested information through the Prestel based videotex system. Perhaps the former PTT museum, now named the Museum of Communication, or the successor of PTT Telecom still might have a few tapes in their archives.
Gepost door Jak Boumans op 9:15 PM