At several places in and outside the Netherlands Dutch language newspapers, books, magazines and other text media were digitized and made accessible. The National Library of the Netherlands , university libraries, Google Books and heritage institutions have brought these files together and made them accessible. For example, more than 30 million pages of original texts from more than 1.3 million newspapers and 1.5 million magazine pages and more than 320,000 books from the 15th to the 20th century can be accessed via a single Internet address: www. Delpher.nl. You can delve into this mountain with digital pages, browse and search for relevant information, if you can read Dutch. The database has no English interface. 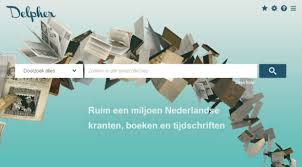 What can you do with such a mountain of information? You can spend much time to browse and jump from one article to another article and achieve surprising results. And a targeted search for eg. study purposes can yield a multitude of relevant results. Furthermore, the database is not only accessible to study - and professional purposes, but also individuals can retrieve a lot of information about their family and environment. 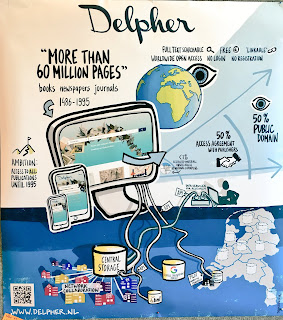 In a study on the history of digital publishing you can find a lot of material. The rise of the newspaper archives, such as nationl paper NRC Handelsblad archive. Tap Viditel and a newspaper article in the Leeuwarder Courant about the launch of the first Dutch public online information service Viditel by former state secretary Neelie Smit-Kroes in Sneek on August 7, 1980 comes up as well as the radio bulletin that day with the notification of the launch of Prestel like videotext system Viditel. And tap Electronic Publishing and an article in the NRC Handelsblad will appear marking the publication of the book by Joost Kist, a later member of the Board of Directors of Kluwer. Likewise search for CD-I and articles appear about the launch by an enthusiastic Philips CEO Jan Timmer, doubts about the success of the medium and the death blow in 1996 by Cor Boonstra. The introduction of the Internet is marked by the Nieuwsblad van het Noorden with an article of October 15, 1994 under the title: Netherlands struggling on the electronic highway. Apart from this kind of interest, one can also look up items from his/her professional life: companies where they worked, publications, published or ads from a former employer. 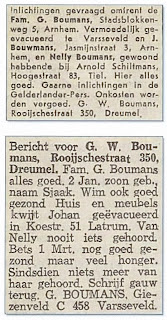 For individuals Delpher is a place for self-abuse. Tap your own name and look at the result. For me there was a real surprise. I was born in January 1945. My parents lived under the bridge of Arnhem in 1944, but had to evacuate to the east part of the Netherlands. When I was born, no birth announcement could be sent to relative elsewhere in the Netherlands, because there was no working mail service. But in Delpher I found a kind of birth announcement in two newspaper items. I was not aware of the existence nor had I ever seen them in my life.

Top item of May 7, 1945: my grandfarther requests information on family members. Item below of May 12, 1945: my farther responds telling where he is with his family and announces my birth.

Delpher is an ongoing project. New books are added. The Google Books scanning program adds files. Archives of post 1990 newspapers and magazines will be merged with the older archives. Delpher can be called Mount Serendipity: you will always find something unexpected and useful material, while you're actually looking for something completely different.