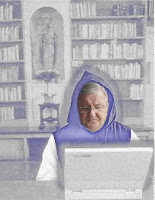 Silence still reigns and I am ploughing my way through the manuscript on the history of new media in The Netherlands. I started with chapter 5 in the past week. It is on videotext in the period 1980 till 1997. The basic text is there; now it has to be refined. It is interesting to look back at the introduction of videotext. It was the first public commercial information service to be introduced in the Netherlands. No one had ever set up such a service, nor experienced such a service. But what surprised me was the fact that videotext was also a political item. About ASCII database the politicians had never worried, but when the then state telecom company PTT wanted to introduce videotext, two advisory groups were instituted. The consequence of competition, copyright and the print world were looked into.

In order to vary the writing I sometimes start to the picture research. I have sent messages to old friends in the business and have asked them whether they still have pictures from the Stone Age up to 1997. And the responses are surprising. Hardly anyone of the 10 people approached had any pictures from that time. I received a nice one of a group of people looking in awe at a search session. The table was covered with equipment: a telephone, a printer, a modem, a portable PC and a demonstration terminal and a lot of wires. I also received an newspaper advertisement for an insurance company showing a teletext service, which functioned only for a short time. I am also hunting for an advertisement of 1980 published in De Telegraaf and the Financieele Dagblad; I wrote to the companies but they did not answer yet. Most probably the archivists are on holiday.

Of course it is not surprising that there are a few photographs left. It was the pre-digital camera period, as an old friend remarked. Now you shoot as many photographs as you want, select and store a few and delete the rest. Besides you do not have to go through the physics routine of going to the shop to get them printed. So I will have to visit some five photograph collections of museums and institutes (ANP, Museum of Communication, NOS, a foundation of the history of technology, the Press museum) and I am not too optimistic about finding forgotten pictures there. I guess that even video is harder to find and more expensive to put online, but that is a worry for later.

I wonder what this action for photographs spells for concrete artefacts like prints of databases, thermal terminals, PCs, CD-ROMs and CD-Is. I am afraid that not much has been preserved. In the meantime we produce a lot of digitalised heritage, but hardly look after any digital heritage of the recent times.