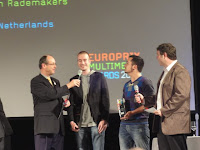 The Utrecht development team of the Nintendo game Swords & Soldiers has been awarded the award in the category games, but also the allover award of the Europrix 2009. Besides this Dutch entry the project Donkeypedia project received the award in the category Online/Web projects. The awards were handed out on the Gala night of the Europrix 2009 in Graz (Austria). More than 350 entries from the European Union and associated countries competed for the prestigious Europrix award. Just 20 projects were nominated for the award, of which 7 projects were crowned in their category and one of the 7 as overall winner.

Special Jury Mention for a game with a high level of interactive storytelling
The Adventures of Tinger, David Scharf, GER

More on the Europrix Festival in later blogs.