It is CES-time. The Consumer Electronics Show has opened in Las Vegas. So it is time for the announcements. Google tried to steal the thunder with its smart phone from Apple, which is rumoured to announce the iSlate, a multimedia tablet, functioning as movie screen, iPOD and as ereader. And the ereaders will be obvious in the stream of press releases. 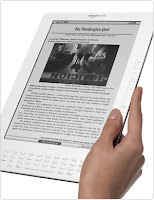 Amazon came with a press release for the international market. It introduced a new version of its larger-screen Kindle e-book reader, the Kindle DX with Global Wireless, which features wireless Internet connectivity in 100 countries. The company has said that the 9.7-inch display on the Kindle DX, first released last May, is more suited to reading newspapers, magazines and textbooks. The move will also make AT&T the company's global partner for 3G Kindle connectivity, replacing previous partner Sprint in the US. The $489 global Kindle DX is available for pre-order today, and will begin shipping on January 19, 2010. As said before I wonder whether the Kindle DX and the Kindle 6 inches are going to sell in Europe at all, given the Mobipocket format and the unknown AT&T network.

Also Microsoft had a product announcement. It finally showed its tablet. Not the rumoured Courier with two pages to be closed like a book, but the HP tablet, a derivative of the HP tablet PC, with a colour screen of 11 inch, but with touch screen technology. And more tablets of this type are to follow, coming from Asus and Archos. A real disappointment. Nothing special, nothing new. But this was not the only disappointment in the product announcement. Microsoft would associate its tablet with the Amazon.com online shop. A cheap choice as the Blio platform had been expected to be the online shop. All together is the Microsoft announcement already the most disappointing product announcement. The tablet was termed to be a Slate PC by Steve Ballmer. It exactly indicates that he does not understand the world of content and text iPODs. 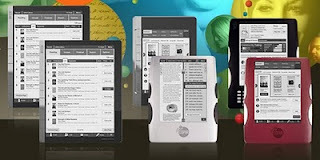 Surprising was the press release of DMC Worldwide. The company announced a new platform dealing with content, community and commerce: The COPIA platform is a hybrid solution for consumers of all ages to experience a completely new way to discover, enjoy, share and purchase books, newspapers, magazines and a wide variety of digital content. At the same time, it integrates a software application engine for OEM brands looking to deliver content across their digital devices including e-readers, notebooks, netbooks, tablets and smartphones. The press release also includes an announcement about its own series of six ereaders: Ocean and Tidal. Every eReader powered by Copia comes standard with 2GB internal storage enough space for about 1500 eBooks. The top of the line Copia Ocean eReader features a 9-inch ePaper capacitive touchscreen, 768 x 1024 pixels resolution, 4-directional tilt-sensor, 3G connectivity (optional), WiFi (802.11b/g), Linux 2.6.21, 2GB internal memory, stereo speaker and 3.5mm stereo jack. The series of ereaders looks like a collection of OEM ereaders already on the market. Copia will be on trial from this month onwards and start selling by April, 2010. At first glance the DMC company seems to combine content, community and commerce for the first time. The question will be whether content is the same community commodity as music.