This afternoon Ms Neelie Kroes, the EU commissioner designate for the Digital Agenda, will be grilled by the European Parliament, said the headline. This sounded alarming, but does she have to fear anything? First of all it is not het first grilling session. When she was appointed to be the EU Commissioner for Competition, she was grilled for the first time. Critical questions were fired at her on her favouring particular companies in the past. She was able to refute the charges. The grilling sessions have a strict format: every member of the parliamentary committee will be able to ask questions. The representatives have a minute to pose their question and the EU Commissioner to be has two minutes to answer.

Questions for Neelie Kroes will centre on her relationship with Microsoft. During the period as EU Commissioner for Competition she really took on the monopolist. Other questions will be on open software and broadband networks. Will Ms Neelie Kroes stimulate open software and open content, especially in government? Another issue will be copyright. So real critical questions on which she can slip can hardly be posed.

Besides her portfolio is Digital Agenda. This is not a field she does not know anything about. In her first turn as EU Commissioner she had to deal with the economic aspects of computing issues. She wanted Microsoft to unbundle Windows and Internet Explorer. Finally Microsoft bowed, but a browser company like Netscape lost the fight with Microsoft and the open-source browser Mozilla gains only followers, now that the unbundling is official.

But also before her turn as EU Commissioner she was involved with Digital Agenda issues. As the rector of a business school, she invited Bill Gates to Holland in 1996 to bestow an honorary doctorate on him. 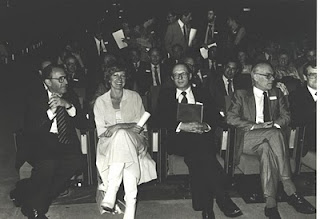 But even before that, she dealt with Digital Agenda issues. In fact she was early involved in online services. From 1977 till 1981 she was Deputy Minister of Traffic in the Netherlands and dealt with new media. In 1980 she opened the Dutch node of the Euronet-Diane network, a datanetwork set up by the European Community (see illustration above). At the accompanying exhibition, the Euronet Diane network was demonstrated by the EC official Franco Mastroddi (see illustration left).


At that time online networks and services got introduced. In 1978 videotex was shown at a consumer electronics fair Firato. In 1980 Viditel, the first Dutch public online service based on videotext and run by the PTT, the state mail and telephone company, was opened. The launch had been planned in the summer, so that the service could scale up easily. Ms Kroes was at that time on holiday in the Dutch lake district of Friesland. And to give the launch a touch of innovation, she was going to launch the service from a yacht. Officials and journalists were gathered in The Hague for the launch ceremony and looking at a televised transmission. Just before the moment supreme, the television cameras started to snore and the lights to glow. And then everything went dark, when she pushed. It was a real omen for the future of the service.

It will be hard to grill Ms Neelie Kroes on the subject of Digital Agenda; she is an old hand.

Update 15/1/2010: The hearing session of Ms Neelie Kroes by a commission of EU parlementarians had a surprising end: Ms Kroes will be invited for a resit. Not all of her answers had been strong, it was said. However, this seems to be a political excuse used by christian democrats and socialists parliamentarians as some of thier candidates for other European Commission positions are being criticised.  This is unbelievable: many of her interogators were still wearing pampers, when Ms Kroes started to use new media! To be continued next week.