No, it was not the 10th year anniversary of Skype, nor the preparations of the soccer match between Estonia and the Netherlands that a group of 25 people from some 20 countries around the world arrived in Estonia. The 25 people formed the Grand Jury of the sixth edition of best content competition, the Grand Jury members of the World Summit Award which event had been invited to Tallinn, Estonia. The national Estonian expert, Katri Ristal, had been able to organise a three day program with the help of the Estonian government, Estonian IT companies and the European Union. And an interesting three days it has been. The schedule shows slots for judging the shortlisted 111 submission in the eight categories. But there was also an exchange between IT companies and the government. 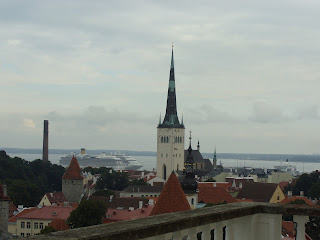 The old city and ports in one picture
It was our first time in Estonia. Flying into the country it looked much like the Netherlands. It is flat and I am told that the highest point in Estonia is under the 400 metres. The driver that picked us up at the airport, hearing that it was the first time in Tallinn, the capital of Estonia, made a detour in order to show the old city. It is a very compact walled city with towers, a lot of cobble stones and picturesque handy craft shops. From the window in the hotel room, we looked out on the seaport and the old city. Tallinn is a much visited city for people on a cruise on their way to Russian city of Saint Petersburg. Daily cruise ships arrive with hundreds of visitors, who crowd the city. Also every two hours a ferries arrive and leave for Finland, Sweden and other destinations. 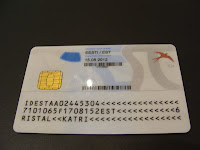 Estonia is an interesting, fast growing country. It became independent in 1991 from Russia. This has given the country the advantage to become a new state with a new constitution. By August, 8, 2000 the cabinet became an e-cabinet, where the 13 ministers did not handles paper files any more, but digital files. Estonians citizens have a digital ID and they can use their ID card for placing signatures. The country also has an e-guard, a voluntary organisation defending the digital government and business systems. The country has also become a cradle for new technology. Estonia is the home of Skype, which was launched 10 years ago. The sale of Skype to Microsoft has brought its founders millions of euro, which have partly been invested in new companies in Estonia. 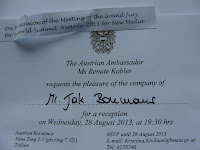 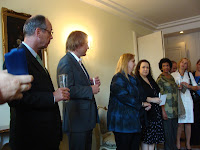 The event started with a get-together at the Austrian embassy. As Austria was the initiator of the World Summit Award, the Austrian diplomatic corps often opens the event of a Grand Jury or an Award ceremony. Now it was the turn of the Austrian ambassador Ms Renate Kobler (3rd from the left) to be the host. Also the Dutch ambassador drs. Jos Schellaars was present.