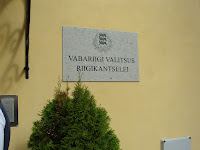 Estonia is a fine European example of e-government. As it has a short constitutional history, its government could choose new opportunities without lugging its history along. So having written its constitution, the Estonian government started looking at new methods to conduct its way of governing. By August 8, 2000 the government held its first e-Cabinet session in its government house, Stenbock. The system was procured by the Government Office and provided by by four Estonian IT companies. In the meantime the system has become a usual feature.


The system is used for public consultations, inter-ministerial consultations, submissions of drafts to the Government and the Parliament. For the citizens and organisations it offers opportunities to add their comments to drafts and keep themselves informed on new drafts and changes. The system is also linked to the State Gazette.


The e-Cabinet system is used for preparing the sessions of Government, sharing documents and information with ministries and in preparation of meetings. The e-Cabinet is also used for the sessions of the Government. And naturally the system is used to keep the digital archives of relevant documents. Users of the e-cabinet are members of the Government and roughly 500  officials involved in the preparation of the decisions; each user category has distinct privileges.


The ministers can find in the e-Cabinet session agendas, agenda items and documents in digital form since 2000. The minister can read documents, summaries and decisions, but also mark positions and add comments to each agenda item. And sign documents, electronically.


You can ask of course why the e-Cabinet was needed? Has the governance improved? From the perspective of the government the movement of information on paper documents was slow. There was occasional disorder of documents and puzzles on various versions. Most agenda items were discussed, while they could have been hammered through with a few annotations. This all lead to long meetings of 4 to 5 hours or more. But this has changed now. There is early information on agenda items, fast and simple access to all documents needed. Pre-session voting by expressing opinions before the meeting. And no paper dossiers.
It is clear that the e-cabinet is not just software, but that it addresses processes. Things have changed and new questions have emerged and answered such as digital archiving, data protection, user privileges. Besides the information does not stand alone, but has to work together with other systems. But the problem of one or many comes up: too many information systems may become a major issue. But the lesson learned is: KEEP IT SIMPLE. As a spin-off of the use by the ministers , officials are using the system, but also the citizens and organisations. 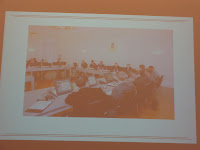 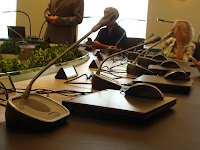 The digital tools have changed over the years. In 2000  every minister had its desktop computer, as can be seen from the photograph of the first e-Cabinet session on August 8, 2000. Now each minister has a portable computer, as can be seen from a photograph taken on August 30, 2013. But this will soon be history too. Before the end of the year the ministers will answer to the principle of BYOD, bring your own device.

Of course the Esonian story sounds like a fairy tale. However in 2007 Estonia was subjected to a major cyberwar during a dispute with neighbouring Russia. This led the country to put together a ‘Tallinn Manual’ on how to defend against cyberwarfare.
The e-Cabinet is a success story. Coming from the Netherlands where we pride ourselves to be in the front of the digital movement, Dutch e-government can still learn a lot from Estonia. Of course we have an ID, the so-called DIGID, but we cannot sign documents using the digital ID. Of course we can take notice electronically of new legal proposals, however Dutch organisations and citizens cannot participate in the preparations or debates. The aim of this project was the development of an electronic e-participation system that enables citizens to submit ideas, discuss them and vote for them. It all started in June 2001 when the Estonian government launched a public participation portal named “Today I decide” (known under the Estonian acronym “TOM”). The TID+ project is inspired by the experiences with the TOM tool. The Dutch government meetings are still not completely digital; there is still a lot of paper involved.  But there are more differences. In Estonia they have 13 ministers for 1,4 inhabitants. In the Netherlands we have also 13 ministers, supported by 7 State secretaries, for 16 million citizens. In the Netherlands we abolished online voting as privacy was not guaranteed. In Estonia online voting facilities were implemented in Estonia in 2005, and accounted for a quarter of votes cast in the 2011 elections. Of course here the ID card is at the heart of the online voting. And no less than 95 per cent of the Estonian population files taxes online. 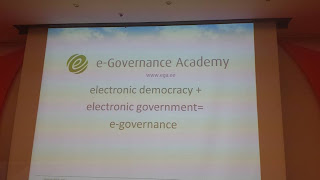 The e-Cabinet experience has a spin-off in the e-Governance Academy. The Estonians are now training officials in various countries in e-government such as Belarus, Haiti, Moldavia, Mongolia, Palestine and Tajikistan. The e-gov Academy also supplies master programs to universities. And the experience is also applied close to home in local and cross-border programs.
Gepost door Jak Boumans op 5:42 PM