30 years to change the face of VNU

The division of VNU Business Publications was founded under the management of Mr Xavier Koot, almost 30 years ago in 1977. Assets of the new division consisted of controlled circulation publications and subscription based publication. A money maker was Intermediair, a controlled circulation, publication for students and academics, which had been bought in 1973. From 1980 onwards the division became the lead party to internationalisation. In 1980 the division made its first international acquisition, buying the computer publication part of the UK publisher Haymarket.

With the internationalisation of VNU through VNU Business Publications VNU was able set out its policy to put a more solid foundation under its activities. Up to 1980 the company had been very depended on advertisement revenues. It was great in high economic times, but a disaster for shareholders in low economic times. Intermediair became a barometer; when the publication contained more than 96 pages it meant profit due to job vacancies. In 1980 Intermediair was in fact the first Dutch job vacancy database, running on the videotext service Jobdata.

VNU Business Publication has been thriving a long time on computer information. It was the inventor of computer publications in the Netherlands with Computable. It got a real boost when it acquired the computer publications from Haymarket in the UK and Australia. It became a heavy competitor of IDC in Europe.

The division expanded from Europe to the States, taking over market information companies registering the people’s behaviour on watching radio and television, music and retail. And it bought also exhibition companies, amongst others Learned Information Ltd in the UK from Roger Bilboul. This was a kind of funny. In 1980 I visited Roger’s company in Abingdon near Oxford. I had just joined the new media lab VNU Database Publications International (VNU DPI) and was making an inventory of the online industry. Learned Information organised since 1977 in December the Online Conference, an exhibition well visited by librarians and cybernauts. From the visit I still remember that Roger was almost paranoid about VNU eyeing the acquisition of his company. It was only in the nineties that VNU acquired Learned Information and Roger Bilboul became ad interim manager for VNU.

VNU/Falcon still have one more sale ahead, namely that of the US business publication division with magazine and exhibition titles as Hollywood Reporter, Billboard, Adweek and Mediaweek. From that moment onwards the company will exist of market data companies without IMS/Health. What should have been the crown on the work of the expansion policy set in the late seventies, has become a dressing down.

For the time being VNU Business Publications will be parked with 3i and meet there their former colleagues of the VNU educational sector of Malmberg. Eventually these two divisions will be sold on. 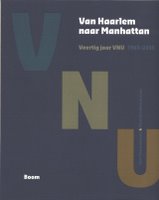