One mobile per child 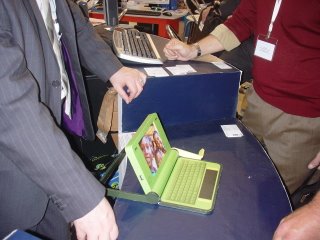 Recently Nicholas Negroponte came to the ITU Telecom World 2006 in Hong Kong in order to promote his One Laptop per Child campaign. These days he is not travelling around any longer with a not-working prototype of the $100 computer as the first ones have rolled off the production line. At the conference in Hong Kong Negroponte said that he hoped to distribute between three and five million of these innovative laptops to children in six developing countries in 2007. The project has had its critics, both from the developed and developing world. But Negroponte is certain he is on the right track and makes a very compelling point. This is an education project, not a laptop project. As he said in an interview here for silicon.com: ‘People say if a child is malnourished, he doesn’t have drinking water, he’s sick, why do you want to give him a laptop? Substitute the word ‘education’ for ‘laptop’ and you will never ask that question again.’

The One Laptop per Child has its followers. Presently the telecom company Celtel International, based in Hoofddorp, The Netherlands is looking into a $10 mobile phone. The company is active with telecom and especially mobile in the African continent. Recently I met a representative of Celtel and had a talk about the project. He insisted that the company is looking into the project and has not yet taken the decision to have the mobile phone produced and rolled out. The company is presently researching the production methods and talking to mobile phone and chip manufacturers.

The plan of One Mobile per Child – it is not a project yet – has its advantages and his critics. The advantage would be to stimulate the mobility and the economy of Africa. Despite the fact that a heavy investment will be needed, the mobile roll out would be cheaper than creating a fixed line infrastructure. Setting up a mobile infrastructure with masts takes less time than digging ducts. The plan could also contribute by micro-education, learning by mobile phone. But this plan has also its critics. Of course the plan would upset the growth curve of the mobile phone companies in Africa. Now it still is seen as a growth area. But the companies would also look at the fraud aspect. How do you ensure that these cheap mobiles get to the right people and prevent fraud. The Negroponte project had a solution for that: the colour of the computer. The computer had a kind of green radio-active colour, which made them hard to sell on the market, so the organisers reasoned. A similar idea could be used in this plan.

I have been the opponent of the One lap-top per child since the very beginning. No matter IF we changed the world Lap-top to Education, it is still a giant white elephant. I was/am amazed at the 'blind' focus on ONLY the lap-top, and little is given on other things such as network, technical support, training etc. Anyway ...

My question then is, and still is, why not look into how to make TV interactive? TV is the most common communication interface the world has at present. Even the monks in Bhutan has it (Remember the movie The Cup?). If man can goes to the moon, I don't see why some smart folks cannot make TV more interactive? If education is the focus, then why not use what is already (mostly) available in the household? Furthermore, the money is taken from a developing country, and if I remember correctly, and the deal is, the country has to oder 1 millions lap-top. Well, any smart school kids would understand the economy of scales, even if Mr. Nicholas Negroponte dosen't. Money don't grow on tree. So, where do all the money should come from?

Few days ago the blog - MarketingFact - mentioned RaboBank is working on using TV as a communication tool between banks and customers. So my theory of using TV as interactive tool is not something that CANNOT be done. Using TV as interactive, 'educational', communication interface has one huge advantage -- a mature network. Yes. there would be fine-tuning needed to make it works, but think of the simplicity of centralized support vs. decentralized personal computers.

Why do we constantly have to reinventing wheels? In this case, the One-lap-top-per-child project, is taking away even more development money away from the needy children.

As for the one-mobile per child. IT is cheaper and is a lot easier to manage.