The Ball of Bastards has to be placed into the framework of the soccer championship. It is a cynical take-off on the championships. Robotic dancer is nice technical project. Neighbours is a very charming project from a technical point of view, but also from a story telling point of view.

These are the laudations of the jury. 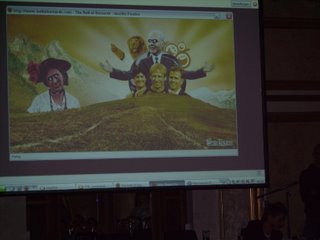 Ball of Bastards (Germany) allows football fans to punish the football monarchy through entertaining interactive online games. The website can even be enjoyed wearing 3D glasses. Developed for the 2006 World Cup, this website addresses the aggression and violent tendencies of fans and athletes in football culture. Users can fire a free-kick into David Beckham’s sensitive areas; let Frank Rijkard’s llama help them spit into Francesco Totti’s mouth; or even scream at a referee through a microphone and drive him insane. Users can also humiliate the “Bastard of the Week” or solve a puzzle and its secret message by wearing 3D glasses. The interactive menu itself acts as a humorous critique of iconic German images and personalities. Ball of Bastards aims to transfer real violence into a virtual space through parody and crude humour.
Team: Jan Philipp Behrens, Ingo Feisthamel, Franz Blach 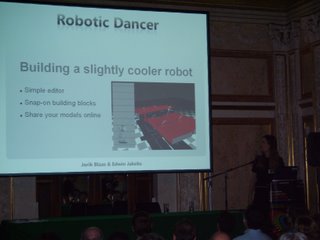 Robotic Dancer (The Netherlands) is a highly interactive game which contains a playful combination of rigid body dynamics and musical synchronisation. The user can experiment by linking the instruments from a musical score directly to forces and torques on the body parts of a 3D model. An innovative user interface visualises all the musical elements and is perfectly linked to the robot’s physical motion. If users choose the right instrument at the right time in the music, the user will see an applied force visualised either by a purple arrow or a purple fan. Users simply press ‘play’ to watch how the robot dances to the beat. Key features include the possibility to use a wide variety of robots, to load models directly from an Internet community or even build a customised
robot.
Team: Edwin Jakobs, Jorik Blaas 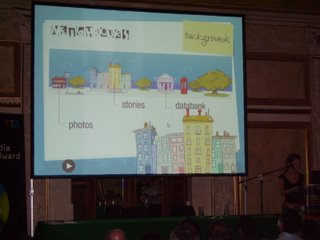 This online interactive comic works on a theme that everyone knows about: nosey neighbours. Neighbours (Hungary) presents its own little-big world where everyone is somehow connected to everybody else. Users must work out that connection themselves and piece the narrative together by exploring each room in the five storey apartment block. Users can also search through various buildings in Green Tree Street and view a photo gallery, the producer’s work or find out details about the characters. Created in Macromedia Flash using hand drawn characters and backgrounds, users will find themselves becoming curious about each character. What is Margaret Pepper doing in the middle of the night? What is the strange noise on the roof? Who is Cecile’s secret lover? What is the favourite tale of little Lily Cube? Users will be intrigued into finding out the link between all of them.
Team: Adrienn Szekacs, Szilard Szell