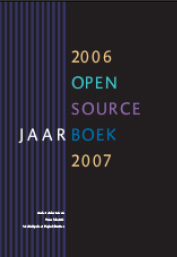 Yesterday I received a book on Open Source Software (OSS) in the Dutch language. Translated it is called Open Source Yearbook 2006-2007. The book was published last week and the first copy was presented to a Dutch politician Mr Kees Vendrik, who asked the government in 2002 to take open source software seriously.

The yearbook is for software professionals in the public and private sector. The yearbook consists of four parts. The first part deals with the importance of open source software and the government policies in The Netherlands. The second part analyses actual question like OSS in education, municipalities and OSS. And new licence types. Part three looks into the future with a chapter on the OSS policy of the European Union. Part four is a survey of organisations and communities in The Netherlands and abroad.

The idea of a OSS Yearbook started to develop when Hans Sleurink, editor of the News service Media Update, when he read a report of the municipality of Groningen. The writers of the report mentioned that they had executed a orientation round and they had the impression that the OSS wave was over. Was this misreading the signs of the time or a plain lack of knowledge? For Sleurink this was a signal to put together a yearbook, which would present a background to trends.

The question of introduction of OSS is not only a local question of a Dutch municipality. OSS has developed itself to an innovative sector in Europe over the last years. Yet the development of the last years is not due to government support; in fact the progress has been made despite the attitude of governments. This is the opinion of Luc Soete, professor International Economic Relations at the University of Maastricht, who wrote the introduction to the yearbook. He draws attention to the fact that governments and municipalities do not use their influence for the introduction of OSS when projects are offered to software companies. Governments and municipalities profess OSS for use in government and municipality dealings, but in practice they still adhere to proprietary software.

However, proprietary software is closed in such a way that we can not look into the software and re-use for society. In OSS everyone is allowed to look into the code, change it and pass it on. OSS has a record of successes: GNU/Linux, the web server Apache, the browser Firefox and the office software OpenOffice.org. And of course Internet consists largely of OSS as does the search engine Google.