The Europrix and later on the Europrix Top talent Award have a history of awarding games. Not just the drill and shoot-them-up games but the mysterious and creative games. The tone was set with the first overall winner Ceremony of Innocence in 1998. This fabulous multimedia product presented many an hour of intellectual pleasure. Another game in this tradition was Timehunt. It has now been taken off Internet, but it was in principle an encyclopaedic game which took more than two years to solve with the help of all kind of discussion platforms. You can still see some remnants on internet. Now the Tulse Luper Journey is joining the tradition.

What are the elements of the tradition. It is a search game. One starts on a trip and can move on after solving a riddle. It has a mysterious atmosphere. In Ceremony of Innocence a bundle of letters arrived with assignments. In Timehunt alchemists and medieval riddles were mixed with contemporary puzzles. The game existed of subgames. In the ceremony of innocence it were letters; in Timehunt it were sunrays; in the Tulse Luper Journey it is a suitcase. All these games were the products of creative multimedia minds. So the selection of the Tulse Luper Journey as a category winner has been done rightfully so (for me it was the overall winner; but I do not want to be a nationalist).

Here are the laudations of the jury.

The Tulse Luper Journey (The Netherlands) reconstructs the life of writer and collector Tulse Luper, who archived his entire life in 92 suitcases. Despite spending most of his years in prison, he mysteriously managed to be at important 20th century events. Based on director Peter Greenaway’s film trilogy, the Tulse Luper Journey is an enormous community project which invited young flash designers from across Europe to submit interactive Flash games. Film fragments, puzzles and letters written by different characters must be unlocked and solved. By collecting all 92 film fragments from each suitcase, gamers reconstruct a 90 minute film about his life. Gamers also have the chance to discuss their ‘research’ in forums or compete for a round-the-world holiday. The installation version features real suitcases which contain LCD screens and hidden PC’s.
Team: Bruno Felix, Femke Wolting, Christiaan de Rooij 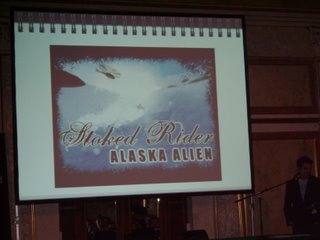 Stoked Rider (Austria) gives gamers the rush of storming down colossal Alaskan mountains. Gamers can explore more than 64 square-kilometres of immense outdoor terrains by dropping down anywhere. Offering no silly gimmicks, the goal is simply survival. This simulator’s breathtaking background visuals and realistic snowboard physics are made possible by a new breed of computer chip that takes the strain of physics calculations away from the central microprocessor. The snow-boarder can be simply controlled by using four directional controls and pressing a key to execute indy airs, backside airs and spins. Upgrades, extended runs and bonuses are earned by free-riding around the various locations. ‘Sick’ runs and records can also be uploaded or downloaded from the game’s website server. Set to be regularly updated, Stoked Rider packs in over a hundred challenges onto 60 MB.
Team: Michael Putz, Klaus Hufnagl