Today Queen Beatrix opens the Institute of Image and Sound, the Dutch public broadcast archive in Hilversum, the Netherlands. The institute has 1,5 million radio and television programs of 700.000 hours on 100 various carriers preserved in analogue form, while about 10.000 hours have been digitised. 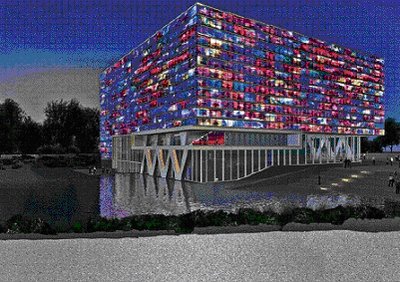 This is an artist's impression of the very colourful building. I have seen it, but I did not have a camera with me at that time.

The institute is not only a library, where video and audio can be borrowed, but the institute will also be an entertainment venue. People will be able to present in front of a camera; they can walk down on a stairways. But they can also call up their favourite programs from their time as a child.

Besides video 2006 has become the years of the broadcast archives. Besides the Institute of Image and Sound in The Netherlands, Archives for All in France has gone online offering a database with almost 1000.000 radio and TV recordings and 10.000 hours of audio and video. In Switzerland the broadcast archive offers an online overview of Swiss history since 1931.