The category of content tools and interface design is an area for innovation. In the past I have seen interface design of islands instead of files. Some of those islands contained audio files and the closer you got, the louder the music was. This year there were three innovative nominations.
Recreating Movement is an interesting content tool for analysing film and movements in films. I saw some 3D pictures of a movie in the past, present and future. It is interesting for analysing, but also for using creatively in a movie itself. The FlashFilterLab is clearly a content tool which make it easy for a developer to create complex flash effects without writing a line of code.

Shgared Design Space is a continuation of a projects which was entered last years by the same team. Roughly you can say that the team aims at producing an electronic, interactive office space. They use the latest technologies like electronic paper with fountain pens equipped with a small camera. Although the office spaces are still not fully compatible, Shared Design Space gives you a good insight in new office developments.

Here are the laudations of the jury. 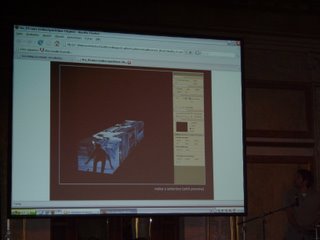 Recreating Movement (Germany) allows users to analyse the evolution of film movement in vivid detail – frame by frame. A host of useful features can be controlled via the keyboard and menu bar. Single film frames can be extracted and rendered onto a set of tube-like frames which ‘freeze’ a particular time span in a film and offer a unique overview. Users can therefore simultaneously see present, past and future can also be rearranged in any order and scaled in 3D space. The structural details of a film’s content can be studied by either analysing the film according to its volume level or by analysing specific colour ranges. Colour can be isolated, deleted or made transparent. Recreating Movement could be used by film analysts, coaches hoping to analyse a player’s technique or even car crash testers.
Team: Martin Hilpoltsteiner 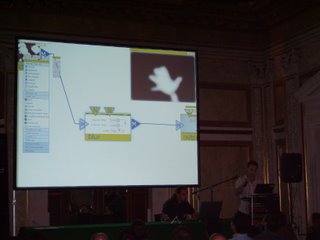 FlashFilterLab (Hungary) helps users to create complex flash effects and movies without having to write a single line of code. It is an intuitive visual programming environment that can be “wired” together to build complex visual filters, effects and Flash movies. Users create graphical flowcharts to perform real-time effects on their content. The simple interface allows the creation of rapid prototypes or complex projects by building a tree of boxes. The number of filter and omponent combinations is unlimited. The software’s website also provides users with their own storage space where they can upload and share their Flash movies and pictures. The website’s community can then grade and comment on other people’s work, share ideas and exchange techniques.
Team: Gabor Levai, Balazs Serenyi, Balazs Kovari, Aron Mezei 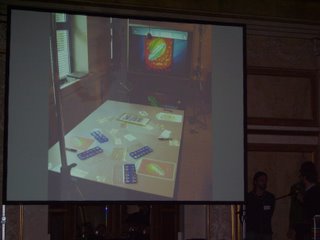 Shared Design Space (Austria) enhances meetings and presentations by making them interactive through intuitive collaborative tools and a tabletop environment. By integrating physical and digital paper, data can be overlaid on a table-top surface and modified by a touch-sensitive interactive wall. Using a digital pen, participants can annotate virtual paper or pick up digital data from the table (e.g. video, image) and drop it on real paper. Users can scroll through the documents by simply touching the interactive screen or zoom in on documents by changing the distance between their hands. A timeline on top provides a map-like overview that can also be used for quick navigation. The display menus are simple to customize for other software and can distinguish between different pens, allowing flexible functionality for various types of users.
Team: Aron Mezei, Thomas Seifried, Doris Zachhuber, Jakob Leitner, Peter Brandl, Doris Bernert, Daniel Leithinger