The EUROPRIX Top talent Award has generated enough nominated interactive installations to start a circus. Over the past years many installations have been presented to the great delight of the jury members who could play with them. Once they were nominated they often were available during the Festival in Vienna. The collection comprises: Kick Ass Kung-Fu, the Jumping Rope, Interactive projection System, Interactive Window Display and the Tone Ladders, a performance with ladders equipped with sensors, producing a light and sound show. One of the most social interfaces I ever saw was the cyborg webcam for an absolute colourblind person, who was able to experinece colours by having them translated into sounds. This years entry was rather abstract, but called up emotions as people started to stroke it.

The interactive TV section of this category did not deliver any nominations this year. This section has been a worrisome section. To me it indicates that interactive TV is not seen as a research area in the universitiesand colleges and the production companies are not interested. Of course there is an award for interactive TV which is being presented during the MIP/Milia in Cannes in April. But not being able to attract a nomination or a winner, is a pity in a competition for young producers.

In this category there was only one nomination. The entry turned out to be the category winner and also the overall winner, to the great surprise of many Festival participants. 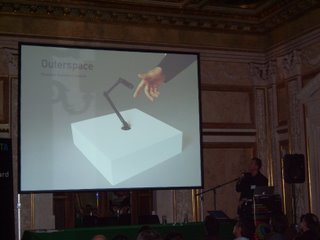 Outerspace (Germany) is a reactive robotic creature that explores the surrounding space by responding to light, motion and human contact. Using various aspects of industrial design, physical computing and artificial intelligence, the robot’s body consists of three limbs made from fibreglass pipes which are controlled by wires and pulleys. The head, the upper limb, contains five photo sensors which are used as eyes to detect brightness and simple motion recognition. All limbs have sensors which react to human body contact. Connected via controllers to a PC, special JAVA software processes all the calculations. Inspired by insect antennae that are able to make flexible movements in order to explore the environment, this robot feeds on curiosity and interaction. People can touch or play with it and watch its animal-like behaviour.
Team: André Stubbe, Markus Lerner