Sometimes you wish you were somewhere else and especially at Christmas time. This year I would not mind being in Finland for Boxing Day, despite the snow (if they have any).

On Boxing Day the Finnish TV company YLE will start broadcasting Accidental Lovers, a black humour comedy of a love between a 60 years old woman and a 30 years young man. Broadcast is probably the wrong word as Accidental Lovers will be an interactive television transmission. Viewers can influence the story line by SMS. These texts will be stored and compared with the texts of the various scripts. Accidental Lovers is a part of the EU's New Media for New Millennium (NM2) IST practice-based R&D project running September 2004 - 2007. The broadband IPTV prototype version of the research production was released by April 2006. On Boxing Day a series of 8 instalments will be started. In total some 70.000 text messages are expected. 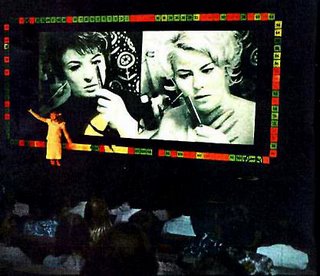 Accidental Lovers is the latest development in interactive storytelling, which started in the sixties in the theatre and moved to the movies and on television. Theatre companies were experimenting with scripts and influencing story lines with voting. At the Expo in Montreal in 1967 a Czech movie experiment Kinoautomat was tried out. In the movie theater’s seating, viewers found two buttons necessary for making selections; they were confronted with a film whose action could always be stopped. At one point, two principal actors from the screened film appeared onstage and asked the audience how they thought the scene should be continued. The viewers decided; afterwards, the adequate film version, arrived at by public vote, was then screened.

In the nineties the Philips was claiming interactivity as the new territory of CD-i. Hollywood story doctors were invited for CD-I productions, but the productions did not really get further than writing more exits to scripts. 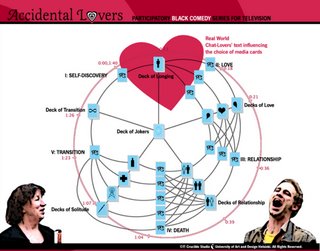 Interesting is that Accidental Love is not called an interactive broadcast, but a participatory series. It has a history since 2003 as it won the Banff Centre New Media CyberPitch, presented by Telefilm Canada as the courtesy of the Bell Broadcast and New Media Fund, at the Banff2003 television festival. Since that time it has become an EU funded project and has in the meantime deliverables such as a Slide Show, Authors' Design Sheets, Teaser Animation, Demo Animation and a Press Release in Finnish 19 June 2003.