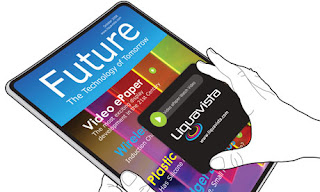 When iRex Technologies recently launched the 10,2 inch screen, the usual objections to an e-reader were heard again: the screen is only for black and white representation and there is no video possible. In response to these objections, I noted in my posting that a colour screen was not far off, but that video was on the horizon by 2012. Colour will be around by 2009, according to Russ Wilcox, the chief executive of E-Ink. But video will take more time and the question is whether E-Ink paper can do the trick.

I personally believe that b/w screen are good enough for many books and newspapers. But that is the same conservative opinion as I had before colour was introduced for newspapers like USA Today. Besides whenever you have colour and video, you can still call up b/w publications.

The Guardian published this week an interesting article on the next generation of digital paper, which can handle colour and moving images. The British Technology Strategy Board has granted 15 million euro to a group of scientists in Cambridge. They will develop the next generation e-paper on the principle of electrowetting. This process electricity to manipulate a thin layer of liquid so that it changes colour; the individual cells change fast enough to run video. Electrowetting uses far less power than a traditional liquid crystal display (LCD). The technology offers bright vivid colours, video speed, exceptional viewability, even in bright sunlight, and substantial power savings compared with other technologies. We are set to play a key role in the portable and mobile applications markets by enabling new advances such as TV on mobile.

The team of scientists has been working on electrowetting at Philips Research Labs in Eindhoven for some 10 years and was spun off from Philips two years ago under the name of Liquavista. The company was created to commercialise the market opportunities of electrowetting displays, a technology that can be used in applications such as MP3 players, watches, cameras, mobile phones, DVD players and automotive applications. (This was also the objective of companies like iRex Technologies and Polymer Vision). The scientific team will be headed by Liquavista's chief scientific officer Rob Hayes and chief technology officer Johan Feenstra. The company plans to announce its first range of products at an electronics fair in Hong Kong this month. The project will also be supported by the US technology company Plastic Logic, which unveiled also a 10,2 inch screen last month.