Just before the great financial crisis Price Waterhouse and Coopers (PwC) published itsnnual outlook on the media and entertainment industry in The Netherlands.

The entertainment and media industry in the Netherlands expanded by 4.4 percent in 2006, up from the 3.1 percent rise in 2005 and the fastest increase during the past five years. End-user spending, which comprised 76 percent of the total market in 2006, rose by 4.0 percent, up from the 3.4 percent rise in 2005. Advertising increased by 5.6 percent, its largest gain during the past five years and well above the 2.1 percent growth in 2005. The rebound in the economy in the Netherlands in 2006 contributed to the jump in advertising.

Fueling the improvement was a reversal in filmed entertainment, which rose by 3.5 percent in 2006 after falling by 11.1 percent in 2005. Although recorded music declined by 6.1 percent, that drop was a 10.4 percentage point improvement compared with the 16.5 percent decrease in 2005. Double-digit increases in video games and sports also contributed to faster growth in 2006. Sports benefited from spending associated with the FIFA World Cup and Winter Olympics and video games were bolstered by the introduction of new console platforms.

Video games and sports were the fastest-growing segments in 2006 with increases of 17.1 percent and 11.6 percent, respectively, and the only segments to generate double-digit growth. The Internet, which was the fastest-growing segment in 2005 at 15.6 percent, rose by 7.7 percent in 2006, falling to third place. Slower growth in broadband access spending and a faster decline in dial-up accounted for the drop to single-digit growth for the Internet, its first single-digit advance since 2000.

Television was the next-fastest-growing segment with a 7.2 percent advance, fueled principally by double-digit growth in subscription spending that offset a decrease in the government contribution to public broadcasters. Out-of-home advertising at 5.0 percent was the only other segment to grow by five percent or more. Digital billboards and digital networks contributed to the increase in out-of-home growth in 2006.

Recorded music, theme parks and newspaper publishing were the only segments to record declines in 2006. Physical sales of recorded music fell by 9.2 percent, offsetting a 200 percent increase in digital sales from a tiny base. Falling admissions at De Efteling and Walibi World accounted for the 0.4 percent decline in theme park revenues, while a drop in newspaper circulation spending offset a rebound in newspaper advertising leading to a 1.1 percent dip in the newspaper market. That drop, however, was substantially less than the 2.1 percent decrease in 2005.

The entertainment and media (E&M) market as a whole in 2006 benefited from a noticeably stronger economy. We expect economic growth to remain relatively healthy during the next five years, which should support continued E&M expansion. We expect overall growth to average 4.6 percent compounded annually during the next five years, comparable to the increase in 2006. Spending in 2011 will total an estimated € 14.8 billion, up from € 11.9 billion in 2006. 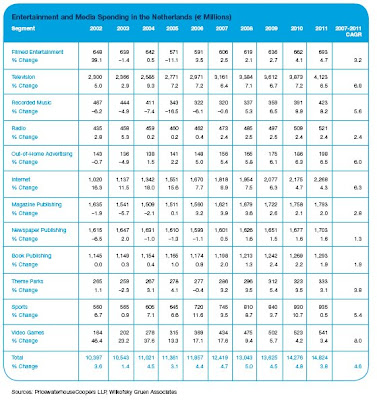 Out-of-home advertising will build on the momentum generated in 2006 and buoyed by increasing penetration of digital technologies will expand at a 6.0 percent compound annual rate. Our 5.6 percent compound annual growth for recorded music represents a dramatic turnaround following five years of decline. We project recorded music to begin to increase in 2008 as the expanding digital music sector begins to become large enough to offset continued declines in physical music.

PcW project sports to expand at a 5.4 percent compound annual rate, led by expanding television rights fees and continued growth in sponsorship gate revenues. Theme parks will grow at a 3.8 percent compound annual rate, as new rides, hotels, and new parks boost admissions. Steady box office growth and increasing sell-through spending will offset a drop in the home video rental market, leading to a projected 3.2 percent rate compound growth for filmed entertainment. PcW expect radio to expand at a 2.4 percent rate compounded annually, helped by a rise in government contributions to public broadcasters. Magazines will lead the publishing segments with a 2.8 percent compound annual increase, while book publishing and newspaper publishing will grow by 1.9 percent and 1.3 percent, respectively. We do not project any segment to decline during the next five years. During the past five years, three segments recorded music, newspaper and magazine publishing declined.