BPN 1407 Nine years on: WorldOnline and its banks did mislead investors

Last weekend I was in Paris for a meeting. I don't think it is fun to be in Paris. People there get too many tourists to be nice and earn their money with unfriendliness. But during that weekend a long awaited ruling was published by the Dutch High Court on a cause celebre: WorldOnline (WOL). 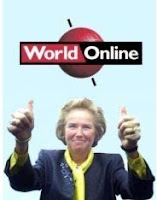 The Dutch ISP WorldOnline (WOL) and the two banks ABN AMRO and Goldman Sachs have misled the investors, when the company brought its stocks to the market. And the statement of CEO, Nina Brink, saying 'I didn't sell any shares at this time' was confusing to the investors, as she had sold part of her shares to companies and friends for 6,04 US dollar per share three months before the IPO, but had this fact not mentioned in the prospectus. That is the outcome of the ruling from the Dutch High Court in the case of the investors’ association VEB against WorldOnline and her banks.

The investors’ association has represented 10.300 stock buyers since 2000, when WorldOnline brought its shares to the Amsterdam stock market. On Friday March 17, 2000 WOL was noted on the Amsterdam Stock Exchange and listed for 43 euro per share. WorldOnline picked up 1,8 billion euro. On the first day the quote went even above 50 euro, but the next day the quote dropped and kept dropping. When the press reported that Nina Brink had sold shares before the IPO, many private investors felt fooled. It was the beginning of the end for WorldOnline. On April 13, 2000 Nina Brink was dismissed as CEO and WorldOnline was sold for a fraction (5,5 billion euro in shares) of the estimated value (18 billion euro) to the Italian ISP Tiscali.

The VEB is happy with the ruling as it is a principal ruling for the private investor. A prospectus should not be misleading, the ruling said, and the WorldOnline propspectus did. The composer of the prospectus is directly responsible for the correctness of the texts and statements.

So now the dancing for the money starts. VEB and the stock buyers will look on while WorldOnline and the banks make out who will pay the bill. WorldOnline still exist as a registered company, still has money and insurance. The two banks will have to fight over their shares in the repayment.

Whether WorldOnline or the banks will claim money from Nina Brink is unknown. Her lawyer informed the press already, stating that Nina Brink will not have to pay as the founder and former CEO of WorldOnline was not involved in the composition of the prospectus. Yet the High Court did not leave much doubt in its last ruling stating that Nina Brink had been unclear about her shares and that her amount had been represented incorrectly in the prospectus.

It will still take some time for the bell to ring for the last dance and pay-out to the 10.300 private investors, some of whom only invested this one time in their lifetime.