In the EU27, 65 pct. of households1 had access to the internet during the first quarter of 2009, compared with 60 pct. during the first quarter of 2008, and 56 pct. had a broadband internet connection in 2009, compared with 49 pct. in 2008. These data published by Eurostat, the Statistical Office of the European Communities, represent only a small part of the results of a survey on Information and Communication Technologies (ICT) usage in households and by individuals in the EU27 Member States, the candidate countries, Norway, Iceland and Serbia. As well as internet use and broadband connections, the survey also covers other indicators such as e-shopping, e-government and advanced communication and content related services. 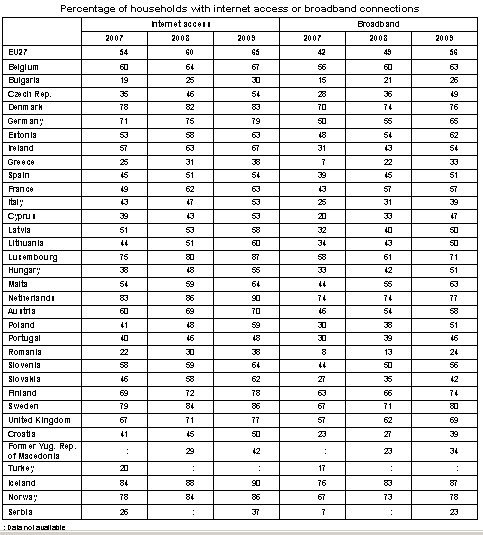 Almost 40 pct. of individuals shop online
Nearly three quarters of those aged 16-24 in the EU27 used the internet on average daily or almost daily in the first quarter of 2009, compared with nearly half of all individuals aged 16-74. The highest shares for those aged 16-24 were found in the Netherlands (90 pct.), Denmark and Estonia (both 88 pct.), Finland and Sweden (both 87 pct.), and the lowest in Romania (41 pct.), Greece (57 pct.) and Ireland (58 pct.).
In 2009, 37 pct. of individuals aged 16-74 in the EU27 had bought or ordered goods or services over the internet in the last 12 months. This share varied considerably between Member States, ranging from 2 pct. in Romania, 5 pct. in Bulgaria and 8 pct. in Lithuania to 66 pct. in the United Kingdom, 64 pct. in Denmark and 63 pct. in the Netherlands and Sweden. In the EU27, 40 pct. of men had ordered goods or services over the internet, compared with 34 pct. of women. The share for men was higher than for women in almost all Member States. 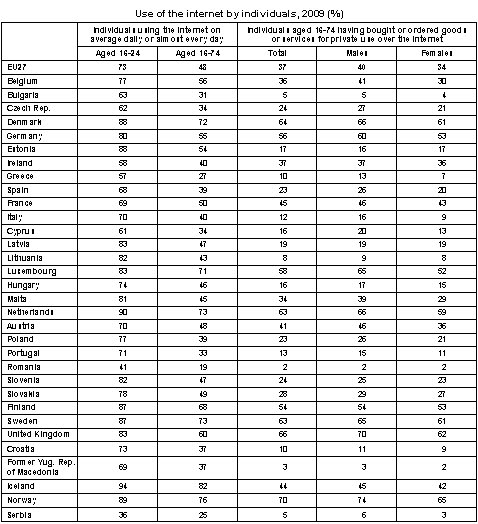